The company, which has been in Paisley, Scotland since 1872 and is in its 140th year, is the oldest manufacturing company in Paisley producing on its original site. The company employs 60 people and has increased turnover substantially in the last few years.

Hugh Gilmour Managing Director said, ‘We are delighted that Mr. Adam’s first appointment of 2012 was to visit our factory in the heart of Paisley and were also delighted that Renfrewshire’s Provost was able to take time out of her busy schedule to see the operation and discuss our plans for the future.

‘As a major employer we are committed to Paisley, many of our workforce are second and in some cases third generation of the same family to work here. With our emphasis on training, innovation and investment we are thriving where many of the traditional local industries have disappeared. We recently invested £500,000 in new equipment and are further investing in continuous improvements to our environmental performance.’

The company supplies tanned hides to Group companies Bridge of Weir Leather Company and Andrew Muirhead, which are then processed and finished for onward supply to the automotive, aviation and contract furnishing industries. The finishing companies supply most of the world’s major airlines and car manufacturers such as Emirates, Singapore Airlines, Volvo, Aston Martin and Ford. 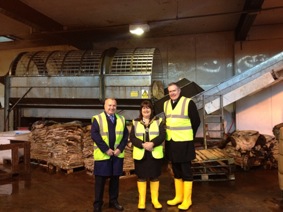