Brazil has remained crucial to the international tanning and fashion trades despite recent economic challenges. Leather International got the inside track on the South American nation’s leather industry with a whistle-stop tour of São Paulo state in mid-January that took in the Inspiramais and Cuoromoda shows, plus a visit to the Couroquimica tannery and shoe manufacturer Carmen Steffens’ production facility.

The 15th edition of Inspiramais in São Paulo, which championed innovations in design and components for leather and textile trends for winter 2018, is the biggest of its kind in Latin America. More than 900 brand new developments demonstrated the very latest in design, sustainability and fashion technology.

A key sponsor of the event, the Brazilian Association of Companies of Components for Leather, Footwear and Manufactured Goods (Assintecal), has been integral in expanding the leather-footwear sector. It was also instrumental in developing the Image Project, in association with Footwear Components By Brazil (FCBB) and the Brazilian Trade and Investment Promotion Agency (Apex-Brazil), to invite media from all over the world to cover and disseminate all of the exciting developments in Brazilian fashion production and design despite the severe economic challenges going on in the South American country.

According to Assintecal, the event generated nearly $250,000 in direct business, due in part to the Buyer Project, which drew ten importers from countries across Latin America.

And as the final tally is made, Assintecal projects that the total business generated during the event will exceed $2 million over the coming months.

One of the main discussions over the two days was by the renowned designer and fashion coordinator of Inspiramais, Walter Rodrigues. Having travelled around the pampas (Brazilian plains), he developed his experiences into a photographic book project, the themes and ideas of which percolated into the trends displayed at the show. Another element was the concept of lightness, effervescence and suspension.

This was used as a counter to the global political shift to the far right. Light colours, materials and perspectives were interwoven into concepts; shapes, textures and shades based on air in order to create an encouraging energy.

According to Rodrigues, working with these ideas, while maintaining a signature of what was uniquely Brazilian was essential, as designs spread across Latin America and beyond, adding that the idea of the event was also to plug fashion gaps by offering a base for the next collections. “Form is the desire of the consumer,” he said, “so originality comes from what materials you use.”

Sustainability was also a prominent theme, with design concepts from across the spectrum, from leather and accessories to clothing and shoes, created from recycled materials. Eighteen tanneries participated, exhibiting collections at the Leather Preview space arranged by CICB, the Brazilian Centre for the Tanning Industry.

Offered twice a year for manufacturers of clothing, footwear, accessories and furniture, Inspiramais is a source of inspiration at which Brazilian ideas resonate domestically and internationally.

The challenge every six months, added Rodrigues, was to be innovative and globally attractive, while maintaining a Brazilian identity.

During the same week of Inspiramais, and across town, was the 44th edition of Couromoda, the largest trade fair for the Brazilian and Latin American footwear markets. Under one roof were the dominant players of the footwear market promoting new collections and trends. This edition featured more than 1,000 new collections and provided a great platform for up-and-coming talent.

SMEs working their way into the mainstream, such as Arteria (a versatile slow-fashion company making high-quality innovative and transformative bags by hand) provided examples of the emerging skill level. Unusual and whimsical, but practical, Arteria sets a standard of craftsmanship and differentiation that is helping to elevate Brazil as a source of new concepts that translates internationally.

Also in tandem with Couromoda was the seventh edition of São Paulo Pret-a-Porter, the international fashion, clothing and accessories industry expo. The synergy between expos provided buyers with the opportunity to examine season trends and concepts for the entire retail supply chain.

Where it all happens

As Inspiramais drew to a close, the Centre for the Brazilian Tanning Industry (CICB) arranged a trip out to Franca, about four hours by car (and through rain, traffic and beautiful, verdant countryside). Once there, we had a walking tour of renowned Brazilian tannery Couroquímica and top South American shoe manufacturer Carmen Steffens.

Couroquímica, which has been in operation for about 35 years, processes about 3,000 sides a day and nearly 30% is exported (as crust) to South Korea, Hong Kong and other parts of Asia. Marketing manager Julio Pimenta explained that, while the domestic market was very challenging, there was a company-wide target of 50% exports for 2018.

“People aren’t spending due to the crisis here,” he said, but he’s optimistic that production volumes will recover. Most of the trade, however, relies on the powerhouse production facility next door. Carmen Steffens comprises about 85% of the entire business, which is why the fairs in São Paulo, Inspiramais and Couromoda, are vital to Couroquímica and Carmen Steffens, respectively.

A quick look at Brazilian Hides and Skins exports throughout 2016 reflects the industry’s keyword throughout the year: ‘overcoming’. Even though the economy and the international market suffered significant setbacks, Brazil managed to grow – 2016 registered an increase of 3.8% in comparison with 2015, reaching 193.9 million square metres shipped overseas. In value, the result was contrasting: Brazilian exports reached $2.033 billion, a decrease of 10.3% in relation to the previous year. The analysis comes from the Department of Trade Intelligence at CICB, following figures released by the Department of Foreign Trade from the Ministry of Development, Industry and Foreign Trade (MDIC).

It is unanimous within the tanning industry that 2016 was an extremely difficult year, especially due to prices downfall in the international market, a decrease in consumption in China (Brazil’s major buyer), as well as the Brazilian political instability and the exchange rate fluctuation. According to executive president of CICB, José Fernando Bello, such factors have created an unfavourable environment for leather exports – and that has a highly negative impact on Brazil, since the country sells 70% of its production to the foreign market. In 2016 alone, 77 countries bought Brazilian hides and skins.

“It’s been a year of hard work, with an extensive international agenda so we could reach such figures,” commented Bello. He recalls the intense presence of Brazilian executives in international trade fairs, visits to clients worldwide and business missions focused on opening new markets and closing orders to maintain production plants working at a sustainable level.

Regarding the types of leather exported, semi-finished and finished played a key role in the year’s final results: they registered a growth of 54.3% and 8.7% in area, respectively. It is a positive number when taken in consideration that one of industry’s main objectives is to have a larger participation of articles of high added value from Brazil in the international market. Sales of wet-blue, for example, have shown a decrease of 1.7%.

Another interesting highlight is that Brazilian bovine leather exports grew 8.4% in square metres, reducing by 8.5% its fall in values, when raw/salted hides and wet-blue split are left out. According to Bello, the expectation for 2017 is that hides and skins sales will grow 5% in area. A Couroquímica employee at work. 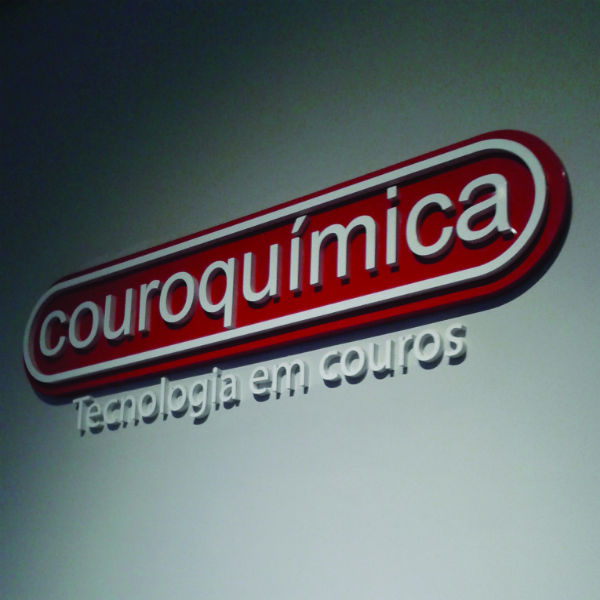 Couroquímica has been tanning hides for 35 years. 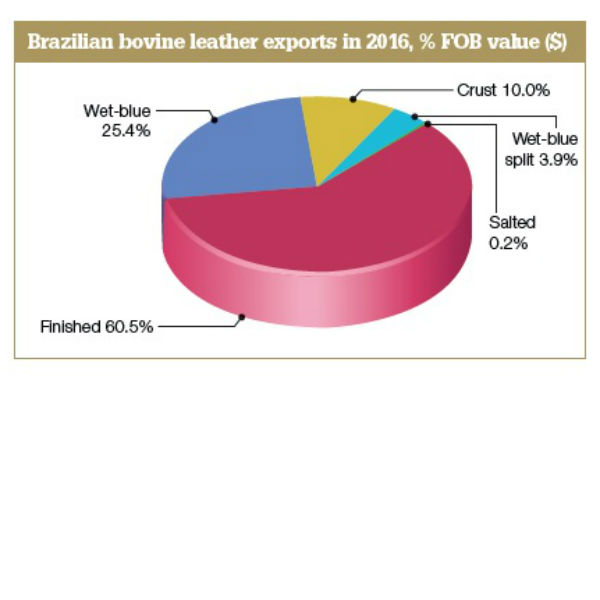