In this edited extract, Eser Eke Bayramoglu, Anıl Özçelik, Mehmet Çetin and Erkan Eren of the Department of Leather Engineering at Ege University in Turkey investigate the use of oyster mushrooms as a way to reduce the amount of chromium in leather waste.

There are many chemicals used by the leather industry that can cause pollution; chromium is one of them and remains the preferred tanning agent for leather manufacturers. Around 80–90% of leather tanning is carried out using Cr (III) salt. At the end of the tanning process, the leather is left for the chemical reaction to continue and the pieces that become wet-blue leather are shaved to adjust thickness. Wet-blue shaved waste is one of the biggest causes of pollution in the leather industry, due to the large amount of chromium present in the shavings. In many countries, these shavings are disposed of in landfills or buried underground, despite the severe health issues this could bring about in the longer term. Disposal of the shavings by burning is not recommended as they contain traces of toxic Cr (VI) compounds.

Chromate and chromate compounds can be absorbed by plants and can infiltrate deep layers of soil, causing water pollution. Chromates may also be absorbed by positively charged soil particles in smaller amounts, where they are prevented from convection to the atmosphere. The unregulated storage of solid waste containing these compounds will result in an increase in the chromium concentration in soil and may cause pollution of water resources.

When the waste created during or after the production of chromium-tanned leather is buried – if the area is not sufficiently insulated – it is inevitable that the compounds will enter the soil. Cr (III) present in the leather is oxidised to Cr (VI), which is a carcinogenic compound and highly toxic. Cr (VI) salt is not used in leather processing, but the compound can be found in finished leathers. This can occur in several ways: as the pH increases during neutralisation, Cr (III) is oxidised to Cr (VI), or the drying process can create the conditions for the formation of Cr (VI).

Discharge of heavy metals to the earth and water without disintegration is a serious issue and leaves a lasting impact on the ecosystem. Most are toxic even in very low concentrations: arsenic, cadmium, chromium, copper, lead, mercury, selenium, silver and zinc are not only cytotoxic, but also carcinogenic and mutagenic when they occur in nature. This fact has been clearly observed in several reports, which show the harmful effects of heavy metals on human health.

It is more important than ever to find effective, affordable and practical solutions for the removal of waste chromium without harming the environment if it is to remain a tanning material in leather production.

Bioremediation is one innovative and promising method for the removal of heavy metals. Microorganisms have developed new strategies to remain alive in environments that contain these substances; they have adapted themselves to various detoxification mechanisms, including biosorption, bioaccumulation, biotransformation and biomineralisation.

One of the main organisms used for biological treatments in the area of waste and environment technology is white rot fungi. The disintegration qualities of these fungi have been determined through various research studies.

White rot fungi occupy an important and privileged position due to their characteristics. It is well documented that white rot fungi in the basidiomycetes group play an important role in the elimination of environmental pollution created by dense industrial activity and the oxidisation of organic compounds possessing very different molecular structures, together with various enzymes they synthesise.

Wood-destroying oyster mushrooms (Pleurotus ostreatus) are saprophytic fungi. They are easy to grow and offer a high yield on organic materials, including lignin and cellulose, without requiring any fermentation due to their strong mycelium structure. As a result, it us possible to use a range of different industrial and agricultural waste for the cultivation of these mushrooms. Pleurotus ostreatus is resistant to toxic chemicals that exist in nature and it possesses very strong oxidative biodecomposition potential.

This research intended to show that white rot fungus can mineralise chromium waste, making the compound harmless and allowing it to decompose without oxidising to Cr (VI).

Wheat straw and wheat bran were obtained from local suppliers, while leather shavings containing chromium were taken from Lider Leather Tannery in Izmir Menemen Leather Free Zone. Pleurotus ostreatus was provided by the importer company OPE Agriculture. The nitrogen content of the waste shavings was determined using the Kjeldahl method.

“Microorganisms have developed new strategies to remain alive in environments that contain [heavy metals]; they have adapted themselves to various detoxification mechanisms.”

Wheat straw was used as a basic material in the research, and wheat bran and leather shaving waste containing chromium were used as additives.

The shaving waste containing chromium was ground and sterilised. The substrate mixtures were separated into four groups and the study was conducted with four repetitions.

The substrate mixture for the growing of Pleurotus ostreatus was prepared at Bergama Technical and Business Collage, Ege University. The materials were weighed with predetermined weights, the mixtures were dampened and the humidity rate was raised to 70%.

The mixture substrate was pasteurised after dampening by boiling in 70ºC water for two hours. The substrate was left to cool after pasteurisation and plaster (1% of the weight of the mixture) was added to adjust pH level. The temperature was rapidly decreased to nearly 25ºC by draining excess water on the table using a perforated grill with ventilation below.

“It has been understood through the study that Pleurotus ostreatus can easily develop and grow on leather shaving waste containing chromium and mineralise the chromium element when the optimum conditions are provided.”

Growing mixtures with decreased temperatures were put into 40x50cm bags, with 2kg of mixture in each bag. Inoculation was carried out by mixing 2% of the weight of spawn suitable for inoculation. The bags, once inoculated with spawn, were compressed and their openings were covered.

The inoculated bags were incubated at around 25ºC and 70–80% humidity during the 15-day incubation period until mycelium colonised. The bags were perforated after full colonisation to induce fructification. The temperature was adjusted to approximately 15ºC in the production room to promote fungus formation and the humidity was increased up to 85–90%.

Each day, 12 hours of illumination with fluorescent lamps of 200 lux intensity were provided. Fresh air was supplied to the production room to promote primordium formation, and CO2 levels were gradually lowered. The mushrooms were harvested by cutting them with a knife after they reached an appropriate size. The chromium content in the substrate and the mushrooms was recorded using an in-house method.

Tests relating to mushroom development and yields were structured with four repetitions and four bags per repetition, according to a random plots test design. A variance analysis of the data was conducted using the SPSS statistical program, and a Duncan test of multiple comparisons was used for groupings. A Wilcoxon signed ranks test was applied to prove whether there is any difference in statistical meaning in chromium quantity within the mushroom and compost samples collected before the spawning of Pleurotus ostreatus and after the harvest. A Kruskal-Wallis Test was carried out to prove whether there is any meaningful difference in determined Cr rates (0.5%, 1%, 1.5% and 2%).

It has been understood through the study that Pleurotus ostreatus can easily develop and grow on leather shaving waste containing chromium and mineralise the chromium element when the optimum conditions are provided. A notable difference is determined in the quantity of chromium in the compost by adding different doses of shaving waste containing the substance. The presence of chromium in the compost did not affect the growth of Pleurotus ostreatus in terms of mushroom development.

Conversely, a yield increase was observed due to the nitrogen content in leather shaving waste containing chromium. Although the nitrogen rate is the highest in the compost with 2% shaving waste, the yield and chromium absorption were not at the maximum rate. This may suggest that a high rate of nitrogen negatively impacts the development of Pleurotus ostreatus.

When comparing both uptake of chromium to the mushrooms and high yield, the most successful results were observed on fungi developed on the compost where 1.5% shavings containing chromium were added.

It has clearly been determined as the result of this study that chromium does not have any negative impact on the development of Pleurotus ostreatus. Moreover, the mushrooms mineralise the chromium by absorbing it and causing it to decompose. This study demonstrated that Pleurotus ostreatus can be used as mycoremediation in leather waste containing chromium. The edibility of the fungi obtained is the subject of another study, and whether these mushrooms can be used as fertiliser or animal feed should also be researched. The mushrooms obtained can also be used for several different purposes as a chromium source. The research conducted is a basic study that can hopefully light the way for many scientists in this field. 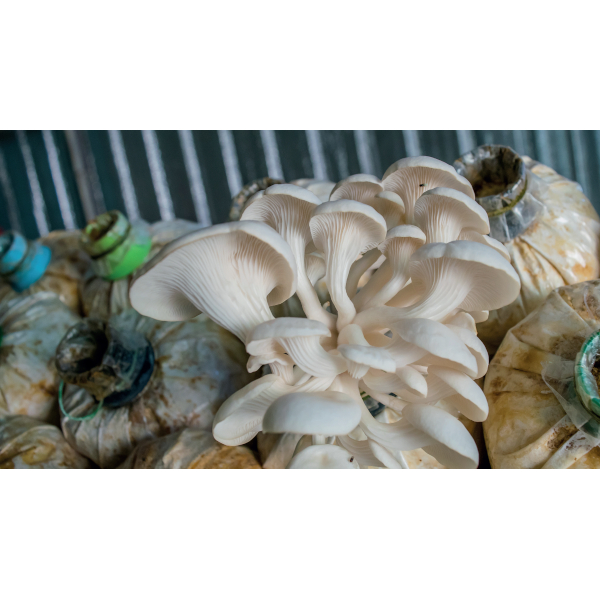 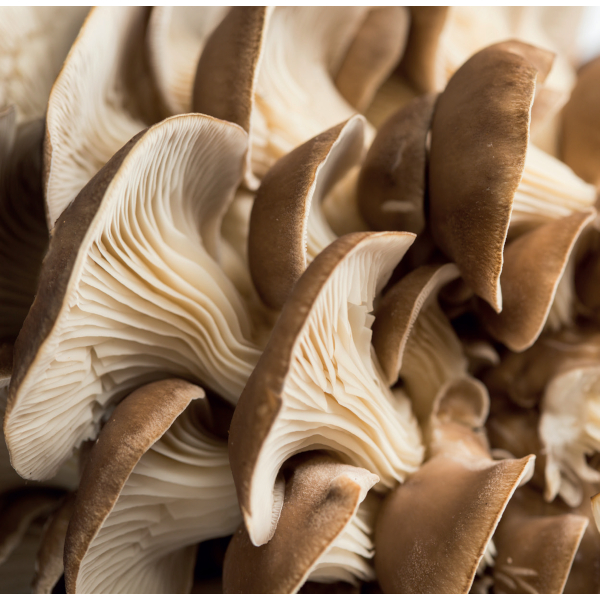 Oyster Mushrooms are very easy to grow and can be cultivated on a range of different organic materials, making them ideal for this study.
Post to: