Furniture market around the world

Andrea Guolo attends leading trade fairs, where he speaks to experts about why Italian manufacturers are thriving in China, and how the German furniture market is recovering.

As well as being the largest furniture manufacturer, China is also becoming a major importer of European-made and highquality furniture that is sold at a high price. Import data backs this up, as does industry news gathered during Salone del Mobile.Milano Shanghai, which took place at the Shanghai Exhibition Centre in November 2017. The event showcased the latest in luxury-Italian furnishing and design, focusing only on exhibitors and products from the country. This focus on extravagance also applied to the elite selection of buyers – and the idea seems to work for the event.

The furniture market is experiencing what has happened in many industries: Chinese people have become richer and increased their spending power. The country’s younger generation travels, studies and lives abroad, embracing Western lifestyles and bringing new tastes back home. As a result, they are more inclined to furnish their homes with products seen – or purchased – in New York, London or Sydney. Italian and German manufacturers, in particular, are reaping the benefits of this trend. The former is unrivalled when it comes to producing stylish and high-quality products for living spaces, while German manufacturers lead the way in making reliable kitchen and home appliances. However, the Italians are ahead in the dynamic Chinese-import sector.

According to FederlegnoArredo, Italian furniture companies exported €341-million worth of furniture in 2016, which was €100 million more than German manufactures and double the amount supplied by US businesses. In 2017, Italian furniture manufacturers experienced 35.8% growth – the highest recorded for the top ten export markets in the furniture and lighting industries, with peaks of 83% for office furniture and 61% for bedrooms. Growth in China and Italy

Interestingly, the event saw buyers arrive from first-tier cities, such as Beijing and the event’s location, Shanghai, as well as rapidly growing areas, including Sichuan, Fujian, Shandong, Henan and Hubei. Established dealers that distribute Chinese furniture attended the fair and were searching for international brands to stock for new store openings. These dealers have been privy to the Chinese-made furniture market’s growth, but are aware that competitive pricing will push sales towards high-end and contemporary products.

“China [presents] the biggest opportunity. [In addition to] the important growth of furniture imports from Italy, [China] is the leading nation in terms of visitor numbers at Salone del Mobile in Milan; Chinese buyers recognise our leadership in innovation and creativity,” says Claudio Luti, CEO and owner of Kartell, and president of Salone del Mobile. “Now they have to improve distribution, but we must understand how to recognise the right distributors for our products. We are already one step ahead of all the retail competitors, and now we need to get organised to work well in the contract and online channels,” he adds.

Market growth in not unusual, as Chinese manufacturers often specialise in upholstery, which enables them to have higher profit margins and incur fewer problems on delivery, assembly and after-sales services when compared with furniture/appliances for other areas in the house, including kitchens. In 2016, the global production of upholstered furniture was worth $68 billion, with 47% of this figure coming from China and 25% from Europe, according to research conducted by Lectra and the Centre for Industrial Studies, which also found that upholstered furniture production is projected to grow by 12% for China, 17% for India and 8% for the US by 2020. In Europe, Italy’s figure is expected to increase by 13%; for Poland, which has become the main production area for German brands, the growth rate is predicted to be 24%.

[In addition to] the important growth of furniture imports from Italy, [China] is the leading nation in terms of visitor numbers at Salone del Mobile in Milan. – Claudio Luti, Kartell and Salone del Mobile

China is, or is fast becoming, a desirable market for Italian leather upholstery brands, taking over from other notable markets, including Germany, the US and even Italy. Poltrona Frau, a Haworth company, believes that China was an important resource for growth in 2017. Nicola Coropulis, general manager, is convinced that Beijing can overtake Italy as the most important market for the Tolentino-based brand.

“After the main cities, we entered the second and third-tier cities, where our products have a great charm because they represent the history, tradition and expertise of Italian manufacturing. We are also entering into various residential projects,” he says.

Esteemed leather furniture manufacturer Natuzzi Italia is expanding its retail network in Greater China by entering into a preliminary agreement with KUKA to form a joint venture, which will see the latter invest €65 million to support Natuzzi’s expansion. KUKA will own 51% of the Chinese corporate entity, with Natuzzi having the remaining 49%. A quarter of the company’s revenues come from the Asia-Pacific region, and its portfolio conists of ten stores that are managed by Natuzzi directly, while dealers run the other 159.

“[China] is the place to be; the market is offering us the best [benefits and] doubledigit growth,” said Pasquale Junior Natuzzi, chief marketing and communication officer. In addition to its expansion, the company made great strides in uniting and supporting China-based architects and designers by launching the Natuzzi Designer Club in May 2017.

Industry developments are taking place quite rapidly, even for the newcomers to the Chinese market. Paolo Castelli, which is a contractor that also specialises in manufacturing designer furniture, exhibited for the first time at Salone del Mobile – and to great acclaim. Owner and founder Paolo Castelli says that he found the company’s first Chinese distributor, Red Star Glory Casa, at the event, and has plans to launch ten brands in the next two years; two of these have already been established and a third opening is on the horizon. “The current numbers are little when compared to the potential, [but here, there are] real opportunities,” states Castelli, who met project developers, and several Indian and Vietnamese buyers at the fair.

Contractors are undoubtedly fuelling the development of China’s furniture industry, but Italian companies are having trouble with entering the demanding market for residential projects, in which semi- furnished apartments are quite prevalent. Few companies have also opened a branch in China, which is essential for understanding the market’s evolution, customer needs and, most importantly, for forming business relationships. Being seen as a reliable partner is vital, as a significant number of these projects are managed by government-controlled companies.

Furthermore, Italian-made products may have inaccessible costs for consumers with a lower income. Some companies that focus on the contract market have been selected for projects, but now it is time to accelerate.

Take upholstery and living area expert B&B Italia: the company established a Shanghai-based subsidiary called B&B China that brought its B&B, Maxalto and Arclinea brands to the country. Giorgio Busnelli, CEO, says that the move gave the company “more visibility” and the chance to follow “the Chinese market in [a] dedicated and right way”. “In ten years, this will be the most important market in the world and, even now, the turnover is growing at the rate of 70–80% a year,” he adds. B&B Italia has been present in China since 1998, but in the past two years, its growth has been exponential, enabling the company to make exclusive agreements with eight distributors, covering key regions for its business, including Shanghai, Beijing and Zhejiang.

Something similar has also happened to well-known Italian brand Minotti. “This is a very fast market; what happens elsewhere in ten years is realised in just one year here,” explains Roberto Minotti, CEO. Within the space of a year, Minotti opened three stores in Beijing and Shanghai with its partner Domus Tiandi, and a third will be coming to Chengdu.

The industry’s development does not end with China: 2018 is expected to be a year of recovery for the wider European market, particularly in Germany. The country has always been a favourable market for furniture manufacturers, especially in leather upholstery, because German consumers want quality and reliability at a reasonable price.

IMM Cologne, Europe’s foremost furniture trade fair, took place on 15–21 January this year in Cologne, where it targeted 150 million consumers, who have the highest income in the continent. This city has been subject to strong economic growth, as well as a recovering real estate market. Company budgets for 2018 are taking these changes into account, with the German population believing that the country can thrive – and at higher rates than the rest of the world.

Cassina, a Poltrona Frau brand, gains 70% of its turnover from Europe. “IMM is a formidable test. The European market, to which the fair is aimed, defines a certain level of international competitiveness and, if you manage to succeed in Europe, it is easier to do well in the US and Asia,” explains Gianluca Armento, brand director.

Bonaldo, which manufactures upholstery and furniture for living areas, returned to exhibit at the fair after five years. “The German market [has], historically, [been] our main reference [point]. Given the remarkable [reputation] of the fair, we felt it was necessary to return to exhibit and directly [engage with] our German and other European customers,” a company spokesmen explains.

The decision to start investing in Europe again is the result of unpredictable exchange rates, given the strong appreciation of the euro against the dollar and of the stability that characterises the European market when compared with, for example, Russia or the Middle East. In other words, Europe guarantees consistent turnover that is difficult to obtain elsewhere. Profitable businesses can be built anywhere, but in order to make a house, a solid foundation is needed first. 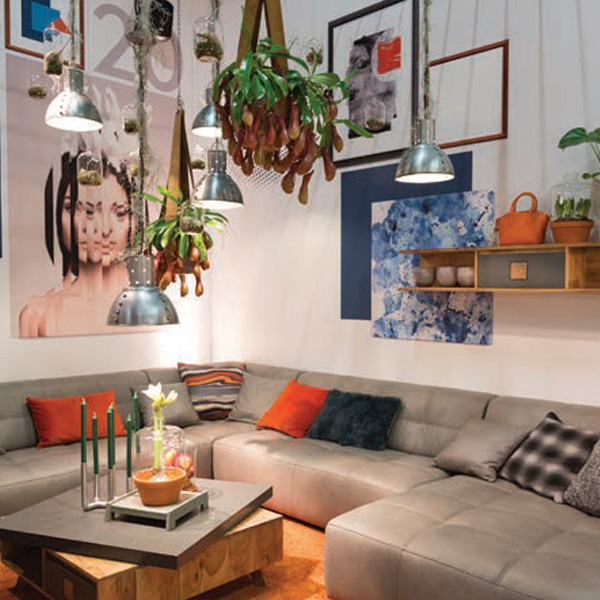 In Germany, IMM Cologne showcased a wide range of interiors for every room. IMM Cologne is a hub for the latest trends that will inuence the furniture and interiors industry. 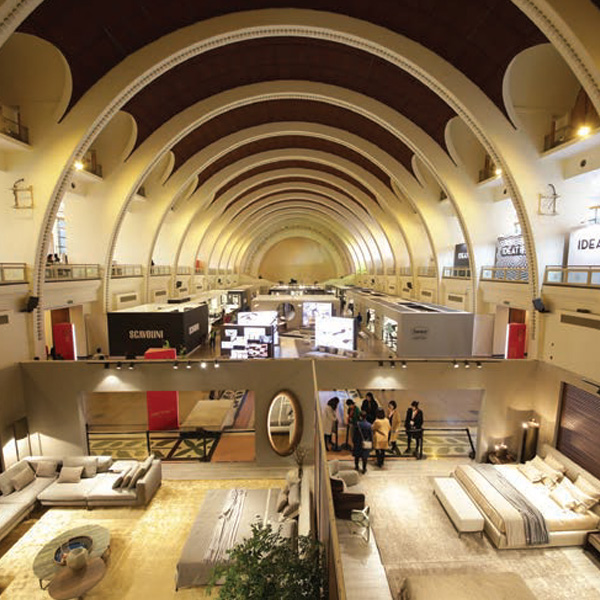