Dirick von Behr and Sjoerd van Driesten of Smit & zoon undertake a study to examine the various methods to determine the optimised exhaustion of fatliquors to minimise ETP inflow.

A proposed amendment of the German regulation for the treatment of tannery waste waters emphasises the minimisation of the pollution burden before treatment, or inflow. Current regulations are directed towards setting limits on what may leave – the outflow – from an effluent treatment plant (ETP). The new provisions, on the other hand, demand that a verifiable reduction of the polluting load is realised before the water enters the treatment system. An absolute decrease at the level of individual components requires the measurement of these components for a starting point.

This article discusses the ways of expressing the exhaustion of a selection of fatliquors on chrome and chrome-free leathers. Each product has a specific affinity to the tanned hide and an individual environmental imprint, and this specificity can be used for targeted reduction of the inflowing pollution burden. The findings of the study can act as a starting point for setting up a methodology and a detailed level of reporting for any who need to understand a fatliquor’s true affinity towards the leather, and those who endeavour to minimise the environmental impact of their processing.

The constitution of untreated effluent float depends on the composition, quantity and manufacture of the chemicals used during the upstream process. Effluent constitution depends on the tannery’s type of processing. The effluents of wet-blue producers, for example, are different to those of tanneries that process from raw to finish, which in turn vary from the floats of producers that work from tanned stock and limit themselves to crusting and finishing.

Liming and tanning yield effluents of more or less known composition, but the inclusion of retanning, fatliquoring and dyeing makes matters trickier due to the wide chemical range of the products applied and the very complex variety of mixtures in the discharged floats. Rules and regulations with respect to the treated effluent discharged have been based on its outflow into the environment. The quality of the water that enters an ETP is of concern more to the operators than to the authorities. Newer regulations state that “the volume of sewage and contaminant load is to be kept as low as possible”. And in the case of wet-end processing, regulations state that November/December it must “reduce the contaminant load in the raw waste water in wet-end process by optimising retanning, dyeing and fatliquoring”. In the past, however, it sufficed to demonstrate that the outflow from an ETP met with the specific rules and regulations of the local authorities, but future requirements will include the need to demonstrate that active efforts have been taken to reduce the inflow’s pollution burden prior to treatment.

The treatment of the discharged float cannot be seen separately from the process it stems from. Processing and effluent water may be identical, but they are, in practice, two different departments with little knowledge of each other and unequal levels of attention for their content. The operator of an ETP needs to treat the sewage received from the factory and may not have an in-depth knowledge of the effluentgenerating processes, yet it needs to know what it is that the factory discharges.

In most cases, at the end of the wet-end processes, the measure of exhaustion is the visible inspection of the spent floats, and a judgement of their transparency and colour. A large variety of products creates a mixture of unknown constitution and consistency, which can lead to fluctuations and failures in treatment and water quality. Knowing the breakdown of residual chemicals in waste water and their influence on water treatment allows an easier and more economical operation of an ETP. The results discussed here are the outcome of a comparative investigation into fatliquors’ affinity to chrome (wet-blue) and chrome-free (wetwhite) tanned leathers, with the purpose of finding tendencies and classifications to predict and control ETP inflow and treatment.

The processes used differed in their design and were formulated with consideration for the specific wet-end processing practices for the two different tannages. The percentages of fatliquor applied were: 10% applied for wet-blue and 14% for wet-white. Both processes represent simplified forms of commonly applied processes: chemical oxygen demand (COD), biochemical oxygen demand (BOD) and total dissolved solids (TDS) determinations were performed at external testing institutes according to ISO 6060:1989 (COD), ISO 1899-1:2003 (BOD) and STAS 9187-84 (TDS). Further analyses carried out were for TSS, TDS and BOD5. A fatliquor’s possible contribution to TSS only stems from improper emulsification, and is therefore related to the handling of the fatliquor and not the product itself. TDS and BOD5 demonstrated the same patterns as found with the COD measurement. For this reason, the study focuses on COD only.

The study compared 12 commercially available fatliquors under identical conditions and acidified with a fixed amount of formic acid to the range of 3.5–3.7 for wet-blue leathers and 3.3–3.5 for wet-white leathers. All values have been based on the float before processing, the exhausted float after acidifying and the subsequent washing float.

For a first comparison, the exhaustion was expressed in the manner commonly used by the industry as percentage. This percentage relates to the original content of the float minus the residue after processing (original COD – residual COD = exhaustion), so 10% for wet-blue and 14% for wet-white. The washing value was multiplied by three since the washing float has a length of 300% compared with the 100% float length used for retanning or fatliquoring. It was seen that, not only between fatliquors, the exhaustion percentage greatly varied but that no general relation existed between their use on wet-blue and wet-white.

Fatliquors of an exhaustion percentage lower than 90% on wet-blue show inferior exhaustion percentages to varying degrees when applied on wet-white, and evidence shows that with increasing amounts of residue in the acidified fatliquor bath, the release of unused products through washing increases too. The ratio between the residues from washing and fixation increases for products that leave only small amounts of residue in the drained float; the bulk of the residue stems from washing. For those fatliquors that leave a large amount of residue, it’s the other way round; the bulk of their residue stems from acid fixation.

The fatliquors show a particular grouping profile. When used on wet-blue, the profiles are notably more specific than when they are applied on wet-white. In both cases a particular gap between the groups is visible. The exhaustion percentage can also be expressed as a fatliquor’s affinity for the substrate it is to react with. None of the fatliquors show a better exhaustion rate on wet-white than on wet-blue, while others show a reduced (sometimes significantly) tendency for binding to wet-white when compared with wet-blue.

From the effluent data, a classification of fatliquors into affinities can be made when the individual fatliquor’s residual COD is opposed to its initial and unconsumed COD:

Fatliquors to the greatest extent consist of organic compounds. Measuring the float’s COD is sufficiently indicative of a fatliquor’s degree of exhaustion and the residue it leaves in the drained float. Based on COD measurements, we find patterns that can’t be related to the origin and composition of the fatliquors used. The commonly practiced method to express the exhaustion of fatliquors by the analysis of the exhausted fatliquor float alone overlooks the fact that what is believed to be fixation is, to a large degree, a reversible binding dependent on pH. The clean float and the pH increase that comes with washing can cause the further release of substantial amounts of fatliquors, some of them still unfixed and others previously fixed. For drawing relevant conclusions, washing floats must be included in any calculation of the kind.

The calculated percentage of exhaustion still doesn’t provide any information on the real degree of pollution generated by the residue of a fatliquor. A seemingly good exhaustion can generate considerable pollutant load while, on the other hand, a lower exhaustion percentage can be relatively light in pollution burden. The exhaustion expressed as percentage therefore has no value to illustrate a fatliquor’s quality in environmental terms. To do so, the oxygen demand needed for converting the residual organic material is a far more suitable criterion to express a fatliquor’s environmental impact and compare it with the residues left by other oils.

The tendency to exhaust can be expressed as affinity towards the tanned hide. Of the fatliquors investigated, none had a higher affinity for wet-white than for wet-blue. A small group shows comparable affinity, but most of the oils demonstrate considerably lower affinity. Randomness appears when attempting to reduce a fatliquor’s affinity to its composition or making. None of the affinities found can be attributed to the chemical composition or to any of its main constituents, and this appears to be a singular property of an individual fatliquor.

The research demonstrated that applying a simple method and a specific juxtaposition of data yields consistent values to define the affinity of any product towards the tanned hide during processing and the pollution burden after its use. Further research would define whether this behaviour depends on a fatliquor’s chemical manufacturing of any of its main constituents, or whether it is independent of this and is a singular property of an individual fatliquor. 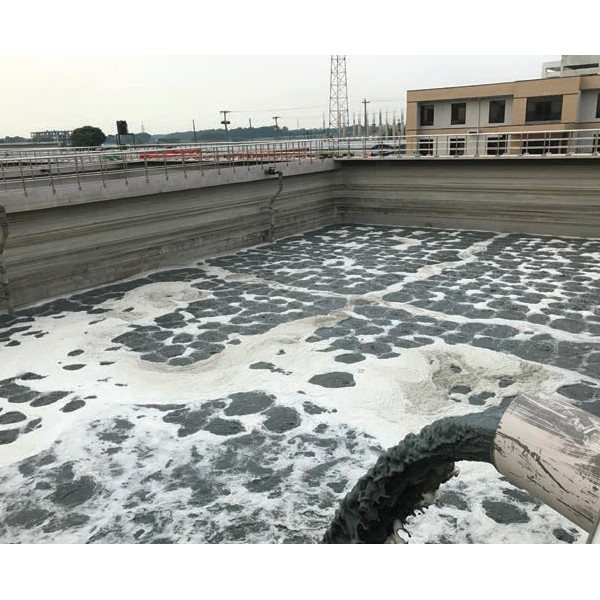 Knowing the breakdown of residual chemicals in waste water allows a more effective operation of an ETP. 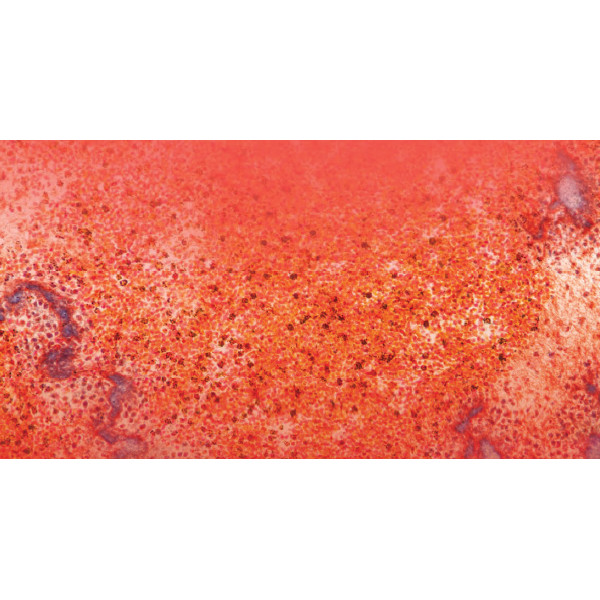 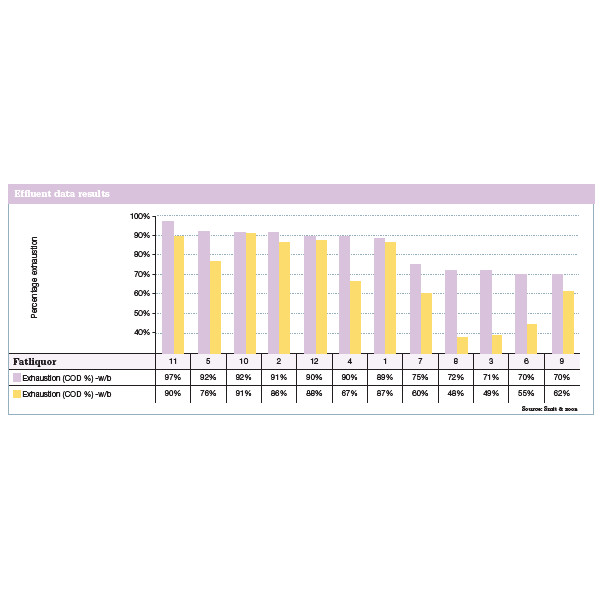