Put to the test

The following is an excerpt from a study entitled ‘Chrome-free tannage: Suede garment leathers from rural vegetable sheep crust leathers’ by AE Musa and GA Gasmelseed from the Department of Leather Technology, College of Applied and Industrial Sciences, University of Bahri; and the Department of Chemical Engineering, Faculty of Engineering, University of Science and Technology, both in Khartoum, Sudan.

Worldwide research is being focused on chrome-free tanning systems. Many studies based on less chrome and chrome-less technologies have emerged in the recent past.

The tannin molecules in vegetable-tanned leathers form multiple hydrogen bonds with collagen and create a polyphenolic tanning matrix. The hydrothermal stability of vegetable-tanned leather is in the range of 70–85°C. By retanning vegetabletanned leather with metals, the shrinkage temperature can be elevated considerably in a process commonly known as semi-metal tanning. Semi-metal tanning systems have gained importance in recent times as an alternative to chrome tanning.

In this study, an attempt has been made to manufacture semi-alum garment leathers from sheep rural garad-tanned crust leathers. Sheep rural garad-tanned crust leathers were carefully sorted for size, substance and grain quality, so that the customers’ requirements can be accurately met. The selected crust leathers underwent the following processing: viz, stripping, bleaching, retannage with an aluminium sulphate prepared solution, neutralisation, dyeing, fatliquoring, drying and finishing. Full chrome-tanned garment leathers from sheep skins were used as control leathers. The physical and chemical characteristics of experimental leathers are comparable to control leathers.

The experimental trial resulted in very soft and flexible leathers with high tensile strength. However, the stripped rural garad-tanned leather retanned with 2% Al2O3, resulting in a shrinkage temperature of 102°C. The experimental trial resulted in leathers with good organoleptic and strength properties. The semi-alum tanning system provided significant reduction in the discharge of total dissolved solids in the waste water. The work presented in this paper established the use of a semi-alum tanning system as an effective, alternative, cleaner tanning methodology

The skins of all animals have, in their time, been used for garments. However, because this is the most worthwhile use for them, most clothing leathers are now made from the skins of wooled sheep or lambs killed for the meat trade. Other sheep skins, such as those of hair sheep, tanned primarily for glove leather, are also used for clothing. Much clothing leather is made from East Indian and other vegetable-tanned sheep and goat skins after a chrome retannage.

Grain and flesh splits from bovines are also used. The latter often provides a particularly inexpensive raw material, but in all these cases the original tannage is not specifically designed for clothing leathers.

The substance of garment leather must be uniform and varies from 0.5–0.8mm (suede garment) or 0.6–0.8mm (grain garment). The substances of lower grades are sometimes kept between 0.8–1.0mm. The garment leathers must be of light weight, soft and flexible, with some amount of spring, but should never be too stretchy so as to make the garment deshape when used. The other desirable properties of clothing leathers are a good drape, uniform appearance, low density and a satisfactory tear strength.

Leather tanning is dominated by the use of chromium (III) salts, because it gives leather unmatchable hydrothermal stability and excellent organoleptic properties. However, chrome tanning has some negative attributes, posing serious challenges to the industry’s continued reliance on it. As a limited resource, chromium (VI) is a well-known carcinogen, but chromium (III) is considered non-toxic. The chromium (III) existing in leather might be transformed into chromium (VI) in some extreme conditions. Therefore, the chrome remaining in waste water and the solid wastes may be harmful to the environment. Nevertheless, the one property that chromium has not been able to provide is fullness, as chrome tanning alone is known to produce leathers that are empty in nature.

Vegetable tanning has been considered as a suitable eco-friendly option to replace chromium.

However, vegetable tanning has some shortcomings, such as the fullness of vegetable leathers, that prevent its use for some end products. Vegetable tannins are also difficult to biodegrade. Among mineral tanning agents, aluminium, titanium, iron and zirconium have been explored for their solo tanning potential, but each one has associated disadvantages. Iron-tanned leathers darken during ageing, zirconium salts are high-cost items and the hydrothermal stability of aluminium-tanned leathers is low compared with chrometanned. Combination tannages are thus being considered as suitable alternatives for chrome-free tanning systems.

Semi-chrome leather is used as substitute for chromium-tanned goatskin, particularly when a heavier substance is required; for example, for unlined casual footwear and slippers. The classical raw material for this leather is East Indian goatskin, exported in the lightly vegetabletanned crust state. Alternative and expanding supplies are available from Pakistan, East and West Africa, and the Middle East. The quality of these leathers has improved recently as far as the process in itself is concerned, but commercial factors affect their qualities, which suffer from the fact that these skins are mainly produced by small tanners who cannot afford the high prices paid by the larger chrome tanners for their raw skins. These leathers are sold by weight in the crust, so that they are often adulterated with Epsom salts (magnesium sulphate), colloidal earths and added fats. The incidence of faults attributable to the presence of large quantities of natural and added fats is increasing, particularly in suede leathers, so that solvent degreasing of the crust goat skins is being carried out by some dressers.

Semi-chrome leather is first vegetabletanned and subsequently retanned with chrome salts. The accepted model of the principal interaction in semi-metal tanning is based on the complexation of metal ion by metal-polyphenol.

The chelated complexation of the metal centre creates cross-links in the polyphenolic tanning matrix resulting in the formation of an extended supramolecular tanning matrix around the collagen. Subsequently, the shrinkage temperature is considerably increased.

Acacia nilotica pods, which are widely used by the industry in the rural and mechanised sectors, have been given different names by different tribes. Bagaruwa or Gabaruwa (Hausa in Negeria) and Sunt-garad (Sudan).

Sudan has various indigenous tanning materials. Some of these, such as Garad pods (Acacia nilotica subspecies nilotica) and Talh bark (Acacia seyal) are used extensively in Sudan by rural tanners. The tannin content of garad pods is fairly high and amounts to approximately 30% of the total weight, soluble non-tans are nearly 20%, while moisture and insolubles make up the remainder. The main constituent of the garad tannin is presumably leucocyanidin gallate – gallic acid esterified with a flavanoid. Garad tannin is reported to contain chebulinic acid, gallic acid and to have a high sugar content, factors common in hydrolysable tanning materials. Garad tannins are therefore mixed tannins, so they contain condensed tannins as well as hydrolysable tannins containing gallic acid esterified with glucose.

The basic objective of this study is to develop a chrome-free tanning system based on a semi-metal from rural vegetable-tanned crust leathers for production of garment leather.

Sheep rural garad tanned crust leathers without any grain defects were taken for tanning trials. The selected leathers were dipped in water, piled for several hours to condition uniformity and then shaved at a thickness of 0.8mm. The usual process consisted of wetting back, stripping, bleaching, retanning with aluminium salt solution, neutralisation, dyeing, fatliquoring, drying and finishing. The leathers were weighed after shaving. The aim of stripping was a light detannage in order to obtain increased uptake of aluminium sulphate salts. Chemicals used for post-tanning processes were of commercial grade. Chemicals used for the analysis of spent liquor were of analytical reagents.

The leathers were sampled as per IULTCS methods and conditioned at 80±4ºF/65±2%RH for 48 hours. Tensile strength, elongation, tear strength and grain crack were investigated as per standard procedures. Each value reported is an average of four tests (two along the backbone and two across the backbone).

The chemical analysis of the leathers for total ash content, for moisture, oils and fats, water soluble, hide substance, insoluble ash percentages, and degree of tannage were carried out for control and experimental leathers as per standard procedures.(Triplicates were carried out for each sample and the average values were reported.)

Crust leather from both control and experimental processes was evaluated for various bulk properties by hand and visual evaluation. The average of the rating for the leathers corresponding to the experiment was calculated for each functional property (see boxout above). Higher numbers indicate better property.

It is essential to study the influence of the tanning system on the strength properties of leathers. The physical strength measurements, tensile strength, elongation, tear strength, load at grain crack, and distension at grain crack were carried out for the control and experimental crust leathers and the data is given in. From the table it is observed that full-chrome and semi-alum crust leathers showed improved strength properties on par with the standard range for garment leathers.

The strength and organoleptic properties of the experimental leathers were generally comparable to those of the control leathers.

One of the main benefits of the work is the lower environmental impact. The spent tan liquor analysis shows significant reductions in COD, BOD5 and TDS loads when compared with a conventional chrome tannage. Hence, these results suggest that this semi-alum tanning system can indeed be used commercially for making garment leather. 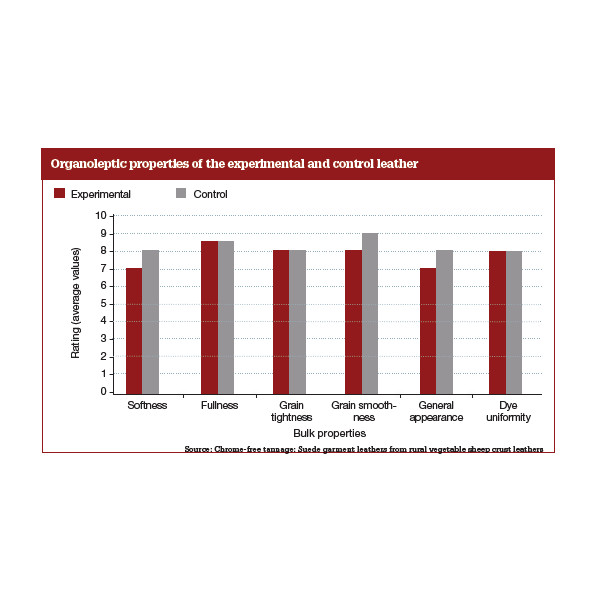 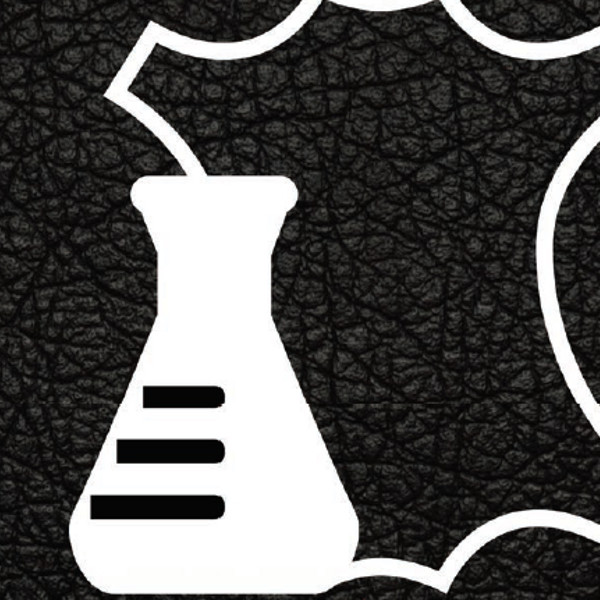 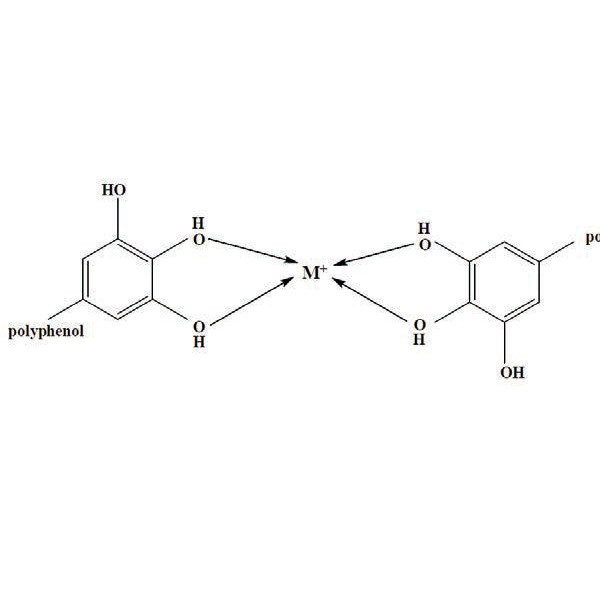 The basis of the semi-metal tanning reaction.
Post to: