At the most recent edition of Lineapelle, hide quality was a consistent topic of concern, with many tanners trying to figure out their next moves. Andrea Guolo explores responses to this issue, the reasons behind these quality variations and how they may be remedied.

In a peculiar way, each edition of Italy’s leather exhibition Lineapelle has coincided with significant events. Having been present for approximately 40 of the shows – from 1988 to the present – the memories are numerous. In October 2017, GST Group filed a voluntary petition for relief under Chapter 11 of the US bankruptcy code on the same day as the exhibition, the repercussions of which were felt deeply by those companies engaged in automotive hide negotiations.

On a more sombre note, the 2001 show began just a few weeks after the 9/11 terrorist attacks, and the markets were still paralysed. In May of the same year, amid a booming demand for leather, there were no raw materials coming from Europe due to the second wave of BSE. And in 2003, the outbreak of SARS was so severe that in China that many questioned whether or not the fair scheduled for May would even take place.

The autumn 2008 and spring 2009 editions were tainted by a collapse in demand after the Lehmann Brothers crisis, and by how, in Brazil, some packers had to bury raw hides as stocking operations (salting and wet-end) were no longer convenient as the selling price had fallen. During this period, a good quality European cow could be bought with €0.4–0.5/kg.

At the last Lineapelle, many tanners voiced concerns about quality. Luxury brands are continuing to grow from the sales of leather goods, with the highest quality handbags being sold mostly in Asian or European markets where boutiques are frequented mainly by Asian customers. Due to the lack of demand for leather for footwear, tanneries are catering for different goods by replacing bovine hides, which are now mainly used by furniture and automotive makers, with skins from calves or sheep as they have fewer defects.

Luxury producers, however, need hides of a very high quality to create premium leathers, and this bar of perfection has risen just as the availability of high-grade products has gone down. Prices have altered accordingly: with less supply comes more demand and higher prices.

Among those who have raised concern over this trend is Jean-Christophe Muller, owner of Tanneries Haas. “When we buy a batch of French calves, we can have 15–17% [that are] of really high quality, while two years ago we could reach 20–25%,” he said. “We have therefore lost at least [seven percentage points] of the best grades, with a very negative impact on our accounts. That’s why I think we have to renegotiate the purchase prices, exceeding at least 10% of the values that are reasonable for us.”

Muller denounces the difficulty of operating with little to no high-quality hides available, particularly when the markets don’t accept lower grades; or if they do, they do so at a much lower price. Tanners pay a lot for purchasing operations; they make a small profit by selling their top-range products, but then must try to sell their lower-grade stock, and end up losing money. This can potentially put a tanner out of business. “The balance has failed,” explains Muller.

This problem is not limited to France. The Italian Tanners’ Association (UNIC) has observed a general decline in the quality of raw materials, which is particularly worrying for those who deal in the skins category, regardless of whether they use calves or lambs.

“It’s not just about European selections, because the same situation has been reported to us by North African countries, where animals graze freely and therefore the justification of intensive farming stress can’t be used,” says Luca Boltri, deputy director of UNIC and head of the observatory on raw materials. “This is probably partly linked to a general deterioration in the living conditions of the sheep and calves, and partly due to the lack of profits in the slaughtering industry, which determines the lack of training in its workers damaging skins during the flaying operations.”

Some of the top-quality calfskins coming from Britany or Switzerland can cost around €9/kg – one of the highest prices in tanning history, and a similar trend is occurring with lambskins. The situation is oddly paradoxical; in the face of low-quality leather garments that have little value – such as those from the UK – there are some of ‘highquality origins’ that continue to rise in price, exposing tanneries to considerable financial risks. This is the case of the Spanish entrefinos and merinos, where the increase in supplying costs is accompanied by a similar phenomenon of qualitative impoverishment.

This is confirmed by Raffaele Musconi, buyer and co-owner of Gaiera Giovanni Tannery. “In 2010, the best grades were more or less 35% of a single batch, but now [this has] fallen [to] below 10%, and we must invent new ideas to upgrade the second and third grades that, without this qualitative effort, would no longer have a market,” he says. And how do brands react? “When there is real quality, they don’t discuss our sale price so much because they know what the situation is. After all, they own tanneries too.”

Franco Dalle Mese, owner of the Montebello tannery, says that this quality problem cannot be solved without creativity. “But then,” says the tanner from the Arzignano district, “the cost of the best finished leather is so high that customers have to accept the lower grades.”

“Bad quality skins have always been around,” say Bernie and Eugenio Famiglietti of the Nuova Icos tannery based at Solofra. “But these days, the share of low grades has increased. In addition to creativity, we must use personalisation and customer service to remedy a problem that does not depend on us.”

Fabrizio Nuti, owner of the Nuti Ivo tanning group – which also includes the companies Lloyd, Everest, Papete and Deluxe – is convinced that this deterioration is a well-established problem. “The real difference is the type of request [made] by customers. [They are] increasingly oriented to the top of the range, and the calfskins suitable for luxury have always been confined to a few areas, mainly Europe, with a marginal share of North American raw materials.”

Certainly, in leather goods and partly in footwear, there are two reasons for the relaunch of the European tannery from 2009 to now, with the first being related to location. Europe is home to some of the top tanneries of high-quality hides, including the Franco-Alpine area for veal and the Mediterranean for lamb. This allows tanneries to buy at high prices, but still draw on a market that has no restrictions, unlike those outside of Europe. The second reason is the ability, particularly of the Italians, to ennoble all leather/leather products that are not luxury. This relaunch, however, risks being compromised by the inability of tanneries to recover the excessive purchase costs spent on the first grades through the sale of second and third-grade products. It is this “lack of balance” that Jean-Christophe Muller was denouncing.

Looking to the future

The leather industry must continue to take into account this new market situation, because achieving quality improvements is a long process, requiring investments without the surety of return. Integrated supply chains would help this process, though they would not be easy to implement lest luxury groups began to invest in the animal supply chain to ensure conditions that would improve skin quality of animals. This is achievable, however, as proved by Hermès with its crocodile farms.

Unfortunately, this hypothesis seems impossible to realise as those opposed to the meat industry would launch new attacks on the leather fashion sector in an attempt to sully its image. This last card is a political one, and consists of shared projects at European level that are aimed at increasing animal welfare, but also improving professional training. We must therefore trust in the EU, which in recent years has not proved itself to be a farsighted handler of projects related to the meat and leather industry. 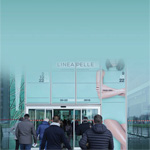