Throughout 2015 and culminating in February 2016, Cotance and IndustriAll-European Trade Union co-hosted a series of seminars under the banner Objective 2025 to assess the future of European leather. As the final Brussels seminar concluded, Leather International sums up what each event meant and how they come together to signal the path of the future.

What began as a need for the European leather industry to strengthen its presence in Europe and in a global context, an alliance was forged between The Confederation of National Associations of Tanners and Dressers of the European Community (Cotance) and IndustrAll-European Trade Union to see certain goals come to fruition.

The result was 'Objective 2025: The Future for European Leather' project, and its summary details the need for a robust and resilient industry that needs involved public support in order for it to thrive. Comprising four parts, its manifesto is broken down into industrial, social/societal, trade and environmental matters, and over the course of 2015, seminars were organised in cities aligned as Cotance member associations, among national partners including leather associations and trade unions in France, the UK, Romania, Portugal, Spain, Germany, Austria, Sweden and Italy.

In Bucharest in late April to kick off the series, industrial issues were covered and over 35 stakeholders of the European leather industry including brands, downstream sector associations, research and educational organisations gathered. Dr Luminita Albu, director of APPBR, the Romanian social partner on the employers' side, opened the meeting followed by a panel of speakers, with Leather Naturally's Mike Redwood; Paul Pearson, secretary of the International Council of Tanners; and Guido Nelissen, economic adviser with IndustriAll-European Trade Union, in charge of industrial policy, macroeconomic policy, international trade and sectors such as automotive.

Over the course of the day, speakers outlined global trends that will shape the future of the leather industry in Europe and, in turn, how the leather industry should respond and adapt. Redwood spoke about urbanisation, demographics and technology, and how these will affect quality of life and, consequently, production and consumption patterns. Pearson detailed global production and trade trends in leather, highlighting the outlook for trade and industry in the areas of raw materials, the allocation of resources, hide prices, leather authenticity labelling and CSR. Then Nelissen illustrated IndustriAll's vision in regard to industrial policy in the EU and recommendations to get the industry stimulated.

The second seminar in Paris in June, hosted by the French Tanners Association (FFTM) and attracting a noticeably larger audience than in Bucharest, focused on social and societal challenges and opportunities, looking ahead to 2025.

Speakers addressed the importance of skills development for the leather industry and the entire leather value chain. Butaud-Stubbs detailed the EU social sector dialogue and Lefebvre covered the risks for the social dialogue that certain EU policy developments entail.

A panel discussion with Butaud-Stubbs; Frank Boehly, president of the Conseil National du Cuir; Dominique Jacomet, director general of the Institut Français de la Mode; and EU social partners of the leather sector IndustrAll's Luc Triangle and Cotance's Gustavo Gonzalez-Quijano provided a wider understanding of the societal challenges that the leather industry is to face in the coming years.

Presentations from keynote speakers addressed the business outlook for the leather sector for raw materials up to retailing of leather products, and over 70 participants and guests from Portugal and abroad were in attendance. Keynotes came from Nick Winters, president of ICHSLTA, who presented a detailed statistical analysis of the trade in hides and skins, and projections for the future; Katarzyna Kuske, from the European Commission, who evidenced the main trade issues that European tanners face in their access to raw materials; Luc Triangle, who reviewed the overall EU trade policy and underlined the need for the Commission to negotiate effective clauses in trade agreements for securing Europe's jobs and businesses; and Isabel Cantista, CEO of Fast Forward Innovation, who elaborated on the winning concept of fashion districts in the cities of tomorrow and the business models that support them.

In December, the fourth seminar in the series took place in Glasgow, with a theme focusing on the environmental impact of the leather industry, and what technological progress in the science of leather has led to better best practices to avoid, minimise and better treat emissions.

The Scottish Leather Group tour the following day certainly illustrated what can, and should, be done to strengthen the reputation of clean, efficient and responsible leather production. But even if Europe sets a high standard in leather production and traceability, leadership is at risk if the education and training at world-class training centres continue to be neglected, innovation will wane, which will have adverse impacts on environmental measures.

SME-dominated sectors in complex value chains face the highest risks and costs, and keynotes from Tony Covington, emeritus professor of leather science at the University of Northampton, addressed how sustainable the leather industry is overall, while industry consultant Federico Brugnoli detailed work he has done to determine the carbon footprint of leather.

Finally, in partnership with the European Economic and Social Committee (EESC), the official sounding board of civil society in the EU, the concluding seminar took place in Brussels in early February where the manifesto was officially presented. It was jointly chaired by Lucie Studnicná, president of CCMI, and Cotance president Jonathan Muirhead, with 60 public and private stakeholders of the leather and tanning sector attending the one-day event.

In support of the sector, the Consultative Commission for Industrial Change (CCMI) declared its alliance with the EU-sponsored initiative, to cooperate on the challenges and opportunities identified. But even with support, difficulties remain across each of the four fundamental sections outlined in the manifesto.

"We need a strong focus on reindustrialisation, but it has to be proved that what will be done will be put in an investment plan," said Triangle in regard to industrial aspects. "What's on the table at the moment isn't sufficient. The question remains that we have to secure the jobs for those who are in it already. New jobs are an issue but I'm seeing inconsistencies regarding new sectors and initiatives. A clear view in the trade policy is not to build barriers to free trade."

This might be the end of seminars for now, but the hard work is just beginning. Everything discussed over the year has to gain traction at the local level across member states in order for initiatives to be implemented. And as a call to further develop the manifesto into a fully fledged action plan, there was an urgency to come up with timetables, list concrete initiatives, and identify the public and private stakeholders willing to contribute to their realisation.

"The last thing we want is for these seminars to end along with the motivation to carry out what is outlined in the manifesto," added Gonzalez-Quijano. "We're here to strengthen and defend our sector, the future and 30,000 jobs. We need to be heard in Brussels." 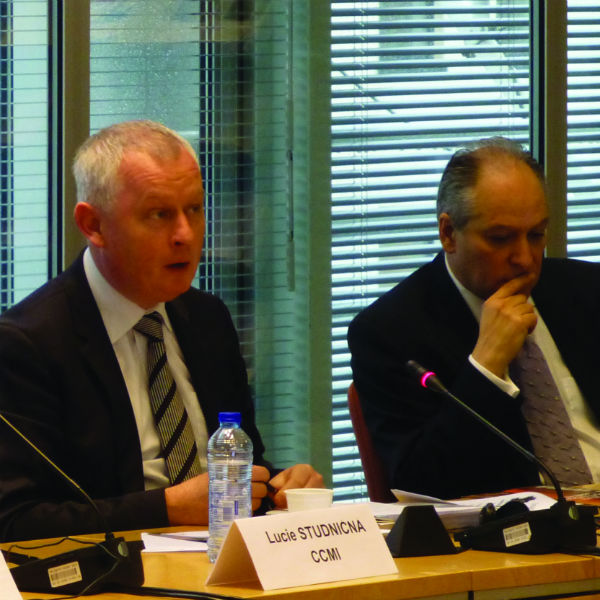