This month, the UITIC Congress returned to Porto for the first time in more than two decades. With the Portuguese footwear industry posting record high exports in 2017, there was a distinct air of confidence in the host city, as Ross Davies reports.

Much has changed in the global footwear industry since Porto hosted the UITIC Congress in 1996. China was at the start of its economic ascent, emerging as a key manufacturing hub. Despite having lost some of its market share in recent years, the country remains the world’s biggest footwear manufacturer. Few could have imagined the new levels of flexibility and customisation afforded by industry 4.0.

The past 20 years have also seen sustained growth in the Portuguese footwear industry, with exports having increased by over 50% in the past eight years alone. In 2017, shipments reached a record high of 83.3 billion pairs at a total value of €1.96 billion.

The choice of location for the 20th UITIC Congress, held on May 16–18, was therefore fitting, as Ana Teresa Lehmann, Portugal’s secretary of state of industry, told delegates on the opening morning.

“Footwear in Portugal is a marvel of competitiveness,” she said. “It is also a striking example of modernisation, with industry 4.0 having been a work in progress for the past two decades. There is no coming back from it – technology is the driving force of the industry.”

The Portuguese footwear industry, through APICCAPS, the Portuguese Footwear, Components and Leather Goods Manufacturers’ Association, is set to invest €50 million to 2020, as part of an innovation and modernisation programme. Leather International was taken on a tour of the Portuguese Footwear Technological Centre (CTCP), on the outskirts of Porto. General manager Joaquim Leandro de Melo said the hope was to capitalise on digitalisation to create more customised products.

For the time being, however, this won’t include 3D printing. “3D printing is a solution for the future, but not for now,” said de Melo. “Our objective is to remain high-priced, giving higher value to the customer. This also means focusing on higher prices across different markets and segments.”

In a broader context, however, the marriage of shoe design and 3D tech is becoming increasingly attractive to manufacturers, Matt Priest, president and CEO of the Footwear Distributors and Retailers of America (FDRA), told delegates.

“We are in the golden age of footwear innovation,” he said. “Design is moving towards digital; the days of having a great idea at a cocktail party and sketching it on a napkin are over. 3D tech can especially be used to make samples. It cuts down on time and is infinitely cheaper. This technology can be used in the supply chain before you even get to the production process.”

Maarten Oonk, head of strategy and new business at the Deloitte Center for the Edge Europe, ran with this idea even further. “4D printing will be next,” he said. “This will provide value to customers and be one of the key drivers of the digital era.”

Vasco Rodrigues, an associate professor of economics at the Catholic University of Porto, used his speech to highlight that the slowdown in Chinese exports in the past couple of years is to the advantage of its Asian neighbours.

While China accounted for 67.3% of the 14 billion pairs of footwear exported in 2016, It lost seven percentage points between 2011 and 2016, with leather seen to be losing ground to the likes of rubber and plastic when it comes to exports.

At the same time, Vietnamese shipments saw a 75% increase, which Rodrigues said was the takeaway message of his talk.

The strapline of the congress, ‘From Fashion to Factory – a New Technological Age’ chimed with what Leather International witnessed on a two-day factory tour around the Porto cluster.

All eight companies visited spoke of a desire to discover new production techniques and evolve technologically. For example, AMF, which produces up to 4,000 shoes a day, is planning to move into a new factory next year for precisely this purpose. “New technology demands a new plant,” one guide explained.

But, for all the new technology, an overriding theme of the event was that tradition remained at the heart of the Portuguese footwear industry. Indeed, every company visited was family-run, with several dating back to the early 1900s. 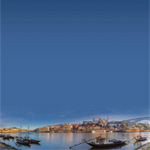