Ovine leather has around half the strength of bovine leather and is therefore not suitable for high-value applications such as shoes. Previously, it has been shown that strength in leather correlates with the extent of collagen fibril alignment (orientation index). Here, we applied biaxial stretching to ovine skins during tanning. The skins were strained by 10% in two orthogonal directions during the tanning process. Tear strengths were measured by standard methods in two orthogonal directions. Collagen fibril orientation was measured using synchrotronbased small angle X-ray scattering. The in-plane collagen fibril orientation index of the manipulated samples rose from 0.4 to 0.6 (p-value=0.01), where zero represents isotropic fibril arrangement and one is perfectly parallel fibrils. Biaxial stretching during tanning therefore artificially induces greater collagen orientation. Tear strength increased as orientation index increased from 33N/mm to 43N/mm (p-value=0.03) suggesting that the increase in collagen orientation due to stretching while tanning results in leather of greater strength.

Collagen structures provide strength and flexibility in the skin allowing the body to endure stresses and strains. It is the collagen networks in the extracellular matrix that support the cells in the epidermis through structures that strengthen and dissipate forces.

Collagen is the most abundant protein in the body with its fibrous nature allowing it to possess a variety of strong and flexible mechanical properties, making it suitable for a variety of functions. The function of the collagen is influenced by the load bearing forces on the particular piece of tissue as it is these forces that determine the collagen fibres’ orientation. Tendons provide a good example of fibre arrangements in response to force.

The collagen’s ability to rearrange in skin has been primarily attributed to the skin’s tear resistance, where fibres reorient to oppose the propagating tear forces. However, if a tear does manage to propagate, the skin heals over this area with scar tissue, where again we see the effects of collagen fibre orientations producing certain characteristics.

The scar tissue skin that reforms over a wound has collagen fibres with a more parallel alignment, a collagen arrangement that has been shown to produce a greater strength. When the fibres align in the direction of the straining forces, this places the collagen’s characteristic triple helix in an optimal position to transpose the forces along its structure, increasing the strength of the skin. Normal skin, which covers mobile areas like joints, has fibres arranged in a more isotropic manner, creating a mesh like structure that allows more flexibility.

Collagen structures produce properties in collagen-based materials resulting from the fibre arrangement in response to external forces and chemical treatments. Methods to create and manipulate these collagen structures have been of interest for medical tissue engineering applications as well as industrial processes like the production of leathers. Collagen structures can be chemically or mechanically manipulated and these will be considered respectively below.

Chemical manipulations target the intramolecular bonds that form between the fibrils; these are called cross-linkages and are important to the collagen’s fibrous structure. Chemical treatments have been investigated to encourage cross-linkages in collagen to increase tissue strength; the most successful of these being treatment with glutaraldehydes to control the properties of the collagen structure. Leathers tanned with glutaraldehyde have been shown to possess a greater resistance to heat and moisture.

While treating the strong collagenbased membrane that covers the heart, the pericardium, with glutaraldehye affected the cross-linkages and also the alignment of the collagen fibres. Tanning is a sequence of chemical treatments that work to remove non-collagenous material from skins while maintaining the natural collagen structure. The main chemicals used include chromium (III) salts and tannins, which increase the denaturation temperature of the leather when compared with skin. This increase in heat resistance is due to crosslinkages formed between the collagen’s fibres. Applying mechanical strains to collagen-based materials has also shown potential to influence the organisation of the collagenous matrix by encouraging the fibres to align parallel to the straining forces.

Leathers have been dried under biaxial stretching forces, resulting in an increased tensile modulus and stiffness due to reorientation of collagen fibres. Not only does this mechanical method influence the collagen matrix applying mechanical strain, but it has also been shown to effect the mineralisation of the matrix by altering the locations of the calcium phosphate nucleation sites, which is important for bone density.

To observe the effects of chemical and mechanical action on the collagen fibres, X-ray scattering has been used to provide insights into collagen fibril orientations and fibril D-spacing. The technique has also been used to measure the change in collagen fibril alignment in leather under tensile strain where it was shown that fibrils become more oriented up to a certain point after which the collagens ability to reorient begins to diminish and the forces begin to be observed at an individual fibril level with an increase in D-spacing.

Collagen orientation is a measure of fibril alignment relative to one another at a certain azimuthal angle where one represents perfect alignment and zero represents random alignment. The collagen orientation has been investigated in leather and has been shown to have a significant effect on the leather’s strength. Collagen fibre alignment appears to have a directly proportional relationship with the strength, whereas more aligned collagen produces stronger leather with a great variability between various mammals.

Ovine leathers are inferior to bovine leathers for high-value applications such as footwear due to considerably lower strength resulting from less fibril alignment. Methods to enhance the strength of ovine leathers could have wide application in the tanning industry to make this leather competitive with those from bovine origins.

Measures of strength have been defined by industry standards in the form of conventional tear test where the force to tear a sample is measured and used to quantify its strength. Our understanding of skins ability to rearrange collagen fibres in response to forces to increase strength, and resist tear propagation and the effects of tanning on collagen orientation suggests two mechanisms that could provide the potential to enhance leather strength.

Here, we performed structural and mechanical studies to determine, first, if mechanical collagen realignment while tanning in skin was possible and if the realignment would be permanent after tanning and, second, we examined the effects of this realignment on the strength, or resistance to tear propagation, of the leather produced.

Leather was prepared from ovine pelts using conventional beamhouse and tanning processes. The ovine pelts were from eight to ten-month-old New Zealand Romney sheep from the wider Manawatu region. After rehydrating the skins, adhering fat and flesh was removed mechanically and conventional lime sulphide paint was applied to the fleshside of the skin at a rate of 400g/m².

Following incubation at 20 °C for 16 hours, keratinaceous materials were removed and the skins washed in water to remove the lime.

Following the last wash, ammonium sulphite was added into the water to lower the pH to eight and a commercial bate enzyme, tanzyme was added before the skins were incubated at 35°C for 75 minutes. Following further washing in water, the skins were pickled in 20% sodium chloride and 2% sulphuric acid.

Control and test leather samples – each 270×270mm – were obtained from the pelts at the official sampling positions with the orientation to the backbone recorded for all samples. The test squares were mounted in a custom-made biaxial stretching device that applied and maintained stretch during the beamhouse and tanning process. Samples were processed with even biaxial forces applying a stretch force lengthened the samples by 10% in both directions. The control samples were processed without tension.

Finally, the skins were treated with a 6% fatliquor solution and fixed with 0.5% formic acid for 30 minutes. After a final wash in cold water, the stretched samples were removed from the biaxial stretching devices and left to dry with the control samples. Tear strengths were measured according to standard methods and normalised for thickness.

Samples were cut from the official sampling position and treated at constant environment conditions (20°C and 65% relative humidity) for 24 hours before tear strengths were recorded on an Instron 4467 instrument. For SAXS analysis, squares (5×5mm) were taken to perform edge-on measurements where analysis was performed vertically across a cross section of the sample from the grain surface to the corium of the leather.

These were mounted normally to the X-ray beam without tension. Six measurements were recorded spanning the cross section with a 0.1mm sample spacing between points.

The diffraction patterns were recorded on the Australian Synchrotron SAXS/WAXS beamline. A high-intensity undulator source was used with an energy resolution of 10–4 from a cryocooled Si(111) double -crystal monochromator. The beam size when focused at the sample was 250×80_m with a total photon flux of about 2×1,012 photons s-1. All diffraction patterns were recorded with an X-ray energy of 8keV using a Pilatus 1M detector with an active area of 170×170mm and a sample to detector distance of 3,371mm.

The exposure time for diffraction patterns was in the range of one to five seconds, and data processing was carried out using the SAXS15ID software. Intensities displayed are all absolute detector counts – one X-ray detected one detector count – except where stated otherwise.

The collagen orientation was determined from the azimuthal angle for the maximum intensity of the D-spacing diffraction peaks. The orientation index (OI) was the primary measure used where OI is defined as (90°−OA)/90°, where OA is the minimal azimuthal angle range, centred at 180°, containing 50% of the microfibrils. The OI range takes us from perfect alignment, which is represented by an OI of one, through to an OI of zero, which suggests high misalignment or isotropy. The OI was calculated from the spread in the azimuthal angle of the D-spacing peak at 0.059–0.060 A−1. Each OI value presented here represents the average of 14−36 measurements of one sample. 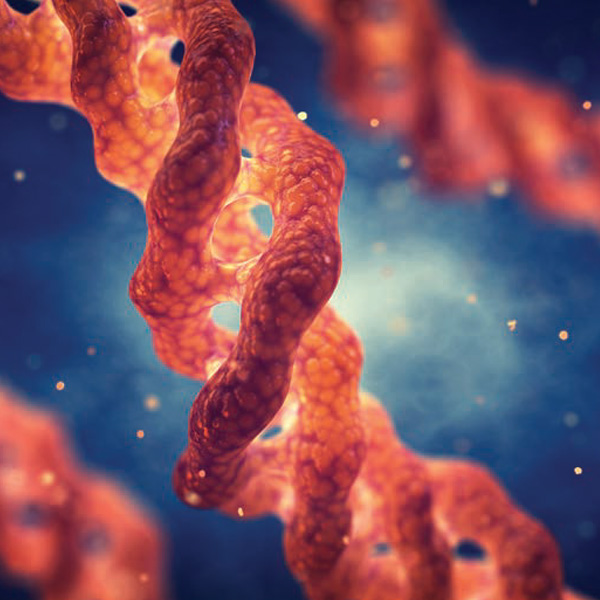 Collagen structures can be chemically or mechanically manipulated in order to increase tissue strength, and increase resistance to heat and moisture. 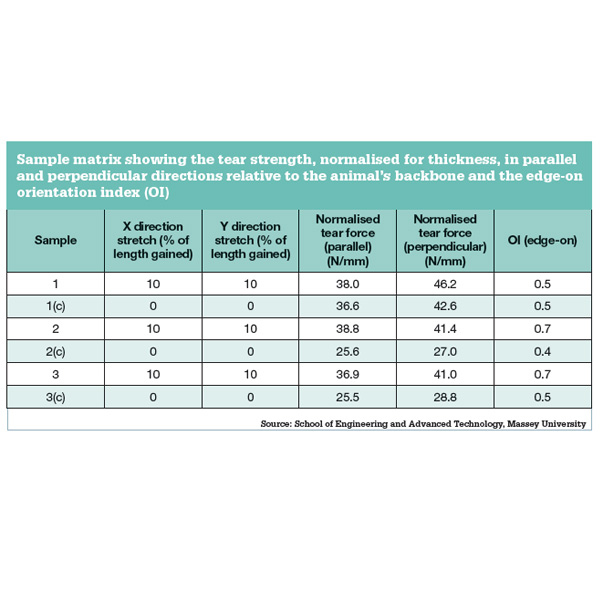 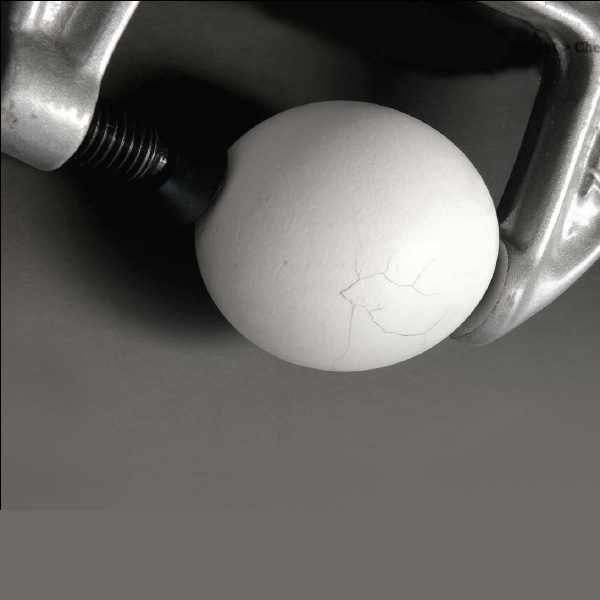