The release kinetics of chromium

The use of chromium salts is an extremely popular and widespread method of tanning as it produces leather that is stable at high temperatures and more resistant to grain cracking than vegetable-tanned leather. However, when disposed of, chromium-tanned leather can pollute surface water as the chemicals leak from the material. This edited version of a paper published by W Long, L Peng, B Shi, R Wang and W Zhang of the Key Laboratory of Leather Chemistry and Engineering at Sichuan University discusses the leaching behaviour of leather in water and the conditions that impact this phenomenon.

Tanning is the process of converting animal hides or skins into leather. It is a way of utilising resources and recycling an organic waste product from the meat industry to create valuable items, such as footwear, that meet consumer requirements in terms of comfort and fashion. There are numerous kinds of tanning methods, including metal salts, aldehyde derivatives, syntans, vegetable tannins and their combination tannages. Because of the unique properties of chromium tanning, it accounts for more than 80% of leather produced over the past 20 years.

When leather goods become waste at the end of their lifespan, the chemicals in the material – especially chromium – can leak out and pollute surface water, soil or even underground water. The migration rule may be related to the interaction of chromium with collagen.

In order to determine the chrome content in finished chrome-tanned leather, 1g of chromium tanning powder was digested by microwave method. The procedure of microwave digestion consisted of a ten-minute gradual increase to 1,400W, a 20-minute digestion step at 1,400W and then a cooling stage. The digestion solution was mixed thoroughly after adjusting to a constant total volume. The total chrome in leather was analysed directly by inductively coupled plasma optical emission spectrometer.

The calibration standard (0.20–5.00mg L-1) was prepared by diluting the chrome standard stock solutions (100mg L-1). All the tests were done in duplicate. Then, the leaching kinetics of chromium from chrome-tanned leather powder in aqueous solution was investigated in detail. This part of the leather is thinner than those used in previous experiments. The kinetic research was conducted at four different temperatures (20°C, 25°C, 30°C and 35°C). First, 4g of chromium-tanning powder was taken in a 250ml conical flask and fully soaked using 80ml of ultrapure water to simulate surface water. Then the 18 flasks were kept in a shaker at fixed temperature with a rotational speed of 60rpm. Two flasks were taken at one hour, two hours, four hours, eight hours, 24 hours, 48 hours, 96 hours, 168 hours and 240 hours to assess the total chrome content of the leachates.

After the leather was digested by the microwave digestion instrument, the total chromium content measured by ICP-OES were 21,445.83mg/kg and 20,672.50 mg/kg, respectively, for two kinds of chromium-tanned leather.

“When leather goods become waste at the end of their lifespan, the chemicals in the material – especially chromium – can leak out and pollute surface water, soil or even underground water.”

The amount of leaching fell slightly as the liquid/ solid ratio decreased. However, considering the water absorption and swelling of the leather powder, the liquid/solid ratio of 10:1 is not appropriate. The concentration of chromium released was in the range of 45.32mg/kg and 54.14mg/kg when changing the rotational speed of the shaker, showing the slight effect of rotational speed.

The leachates of FCTLS contain a higher concentration of chromium, suggesting that the release of the compound from the leather could be increased in an overly acidic environment. In the pH range of 4–11, meanwhile, the chromium concentration released was not significantly affected by the increase in pH value.

The contact time and temperature have a greater influence on the extractive chrome content compared with liquid/solid ratio, rotational speed and pH of the fluid. At 35°C, the extractive content of chromium reaches the highest concentration. This indicates that the release of chromium is sensitive to the leaching temperature, as the extractive content increased steadily as the contact time increased from zero to 24 hours. In the first eight hours, the chromium content increased rapidly over time. In the second phase (between eight and 24 hours), the change in chromium content was comparatively small. Then, the effect of temperature and contact time were further investigated, with the liquid/solid ratio and rotational speed kept at 20:1 and 60rpm, respectively, and deionised water used as the fluid.

The shrinking core model was frequently used to describe the leaching reaction of the solid reactant with spherical particles. According to the model, the leaching reaction occurs first in the outer skin of the particle (the core) and moves into the solid, leaving behind completely converted material and inert solid (the shell). This model assumes the solidliquid leaching reaction generally involves a chemical reaction on the surface of the core of unreacted reactants, accompanied by both fluid and solid phase (pore fluid) diffusion steps. Under the assumption of rate-control step, the shrinking core model could be simplified as the following equations:

In these equations, ki is the apparent constant for different control steps, x is the ratio of chromium content in liquid phase to total chromium content in dry leather powder (dimensionless) and t is the leaching time in hours. The three equations were then applied to test the control step of the chromium extracted by water. The plots were shown in Fig. 1 and the correlation coefficients were listed in Table 1.

The correlation coefficient (R2) values for these fitted curves are below 0.96. Taking into account the geometrical factor of the powder of waste leather, which is a strip flake material with a loose and porous surface structure, these three equations were not suitable to demonstrate the leaching process.

Most of the reaction kinetics-based models assume that mass transfer is fast enough to be neglected. When the solid reactant is porous, the fluid reactant could freely diffuse into the interior of the solid. Then leaching could be considered as homogeneous reaction throughout the solid, and a gradual variation in the solid reactant concentration within the particle would appear during leaching process. Therefore, the experimental data were also applied to the pseudo-first- order kinetics and pseudo-second-order kinetics.

The Arrhenius plot was obtained based on the Weber-Morris model, with a correlation coefficient of 0.9703. Then, the apparent activation energy was estimated as 31.05kJ/mol, indicating a higher energy barrier of chromium diffusion in leather matrix.

The releasing behaviour of chromium from leather was tested to simulate the surface water in this study. The results showed that the main factors affecting chromium release from leather were temperature and contact time. The optimal leaching conditions were a liquid/solid ratio of 20:1, a rotational speed of 60rpm and deionised water used as the fluid. However, the leachable chromium in water was low – about 0.18 –0.43% of the total chromium found on the leather. 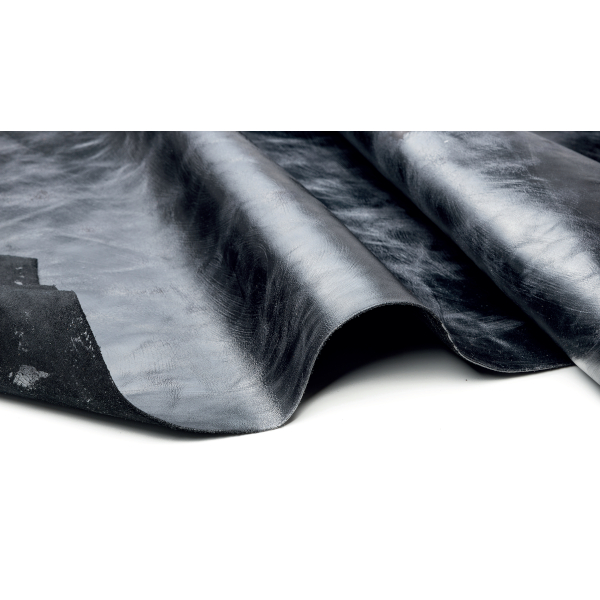 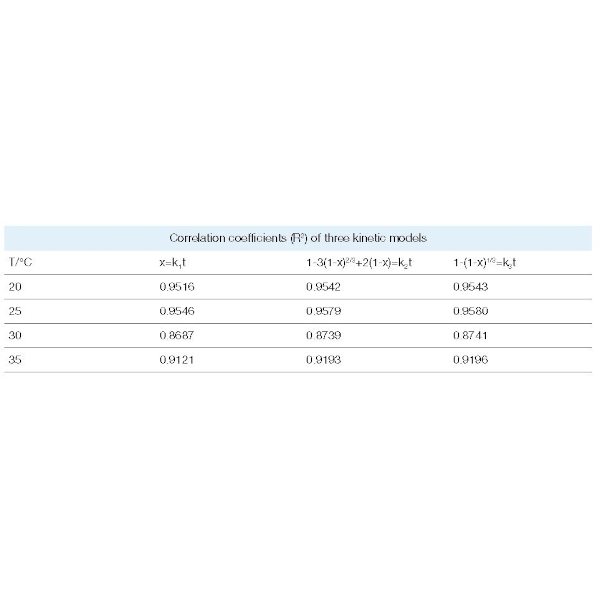 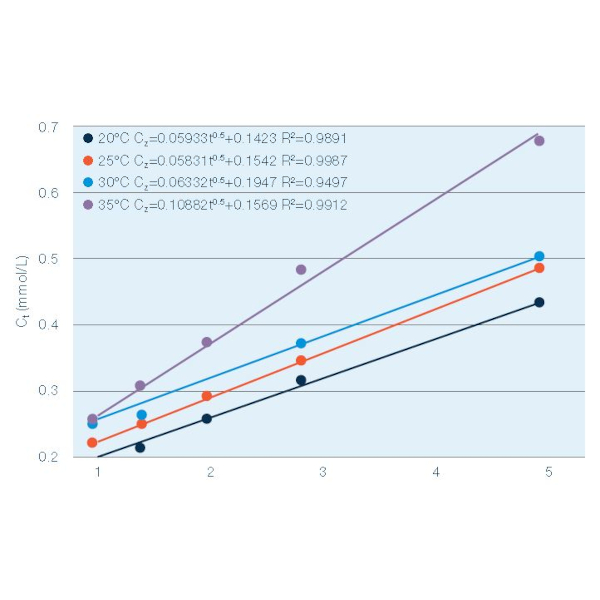