View from the US by Vera Dordick

From the hide market perspective, the resulting disappearance of demand drove hide prices down further. In the US market, however, sliding prices came to a halt when slaughter dramatically dropped. The record low harvest numbers were caused by Covid-19 infections spreading quickly through meatpacking plants, which had to close in order to clean facilities and test workers. With the nation’s food supply at risk and possible meat shortages on the horizon, President Donald Trump signed an executive order directing plants to stay open. Some plants, however, still needed to pause because of absenteeism among fearful workers. The big dip in the supply of hides extended packer forward-sold positions and allowed sellers to decline low bids.

Trading volume in Texas steers remained low through April and prices stabilised at $15.00–16.00. Sales of branded steers, also known as Colorados, had dropped as low as $12.00, but were making their way higher with sales reported as high as $17.00.

Cancelled orders in Asia – mostly in China – hit the cow sector, bringing prices to the market bottom of 2019 or lower. Branded cows were again selling at about $1.00 for seasonal average weights of northern type material. Dairy cows were again weaker, with sales logged from $9.00 to $10.00 for average quality selections.

The important North American cattle hide complex has spiralled downward, and the effects have been numbing to the point of losing touch with the actual state of the trade. Throughout April, the price spreads reported were amazingly huge, especially considering the historically low price structure. For example, branded steers were selling in a price range of $14.00 to $19.00, which is a spread of over 25%. To put it in a different light, if the same percentage range were in play on a market where the low end of the price range was $75.00, the top end would be selling at $100 on the same selection in the same day or week.

The pre-existing condition of leather already being out of favour as a major component in footwear and other purposes, combined with the worst medical disaster since the flu of 1918, created the present debacle. While the world will pick up the pieces after the spikes in illness have vanished and a viable vaccine becomes widely available, it will be particularly difficult for our trade to dig out of a disaster within a disaster.

That said, US export sales in April saw some of the highest levels in quite some time, with China purchasing the bulk of each week’s total. In the first three weeks of April, sales were in excess of 1.7 million raw hides. Shipments in April were not as impressive, leading to questions about sales positions given that shipments have lagged far behind sales. For the month of March, weekly average rawhide sales were 540,340. Average weekly raw hide shipments were 366,060.

According to the Leather and Hide Council of America, cured cattle hide exports fell 8% in volume and 16% in value compared with the same period in 2019. Wet-blue shipments decreased by 10% in volume and by 7% in value. Vietnam was the largest buyer of wet-blue by value, totalling more than $23m.

The USDA’s monthly cattle on feed report estimates that 11.3 million cattle were in feedlots with capacity of 1,000 head or more on 1 April, totalling 5% less than the same month in 2019. The inventory included 7.08 million steers and steer calves, down 5% from the previous year. This group accounted for 63% of the total inventory. Heifers and heifer calves accounted for 4.22 million head, down 7% from 2019. Placements of cattle on feed during March totalled 1.56 million head, 23% below 2019 and the lowest figure for March since the series began in 1996.

Of course, cattle supply was not the big issue in the US in April, but rather the slaughter levels. The workforce in the nation’s meatpacking plants, where people work shoulder to shoulder, was hit by Covid-19 and those plants became hotspots of infection. Numerous large plants were closed for cleaning and worker testing until the presidential executive order was issued, mandating that they remain open. Workers fearful of the virus opted not to report for work and plants still had to pause production for cleaning and remediation, which brought slaughter levels to record lows. Naturally, this brought down the number of hides available. That said, the dip in slaughter and lower hide availability failed to impress Chinese buyers, who were still pushing for lower prices through the month. New sales were largely driven by prices that were low enough buyers couldn’t resist, creating a feeding frenzy – but not a buying spree created by a need for hides. It was not surprising that customers in China accounted for the overwhelming majority of hide sales – 80 to 90% each week – given that it was one of the few regions operating at the time. In fact, China’s purchasing included some of the largest quantities that country has bought in a given week in at least the past three years. Of course, the bottom line is that without orders, the price-driven buying cannot last and higher prices would end it even sooner. As one industry source put it, “Leather orders are the cure for what is going on – the kill does not matter.”

“Even though most buyers were not in a hurry to receive their hides, one would have expected the number of shipments to be ticking upward, not downward.”

The year so far

For most of 2020, no single week of trading has been what anyone could call typical, especially given this unusual period in history. A number of factors were at play in what most would call an ugly market. As already noted, supply was an issue as packers went from slaughtering a record high number of cattle to a record low total in about a month’s time. After having made good sales, they quickly swung to worries over the hide supplies.

At the same time, sources said that securing containers was again becoming an issue and that booking space on vessels continued to be a challenge. Throughout the month, shipping media reported that blanked sailings had at one point quadrupled, which would not ease the situation. Although sales numbers have been high, many sources speculated that a good percentage of the total was actually resales and renegotiations. In addition, others commented that a proportion of these buyers are likely less than trustworthy when it comes to honouring contracts and some sellers – packers included – would find themselves with a good number of unshipped orders.

And speaking of shipments, even though most buyers were not in a hurry to receive their hides, one would have expected the number of shipments to be ticking upward, not downward. While there was a modest increase in late April, for most of the month the numbers lagged. In fact, in the second week of April, combined shipments were the lowest in 2020.

The bottom line is that until economies start to phase back into life, the orders won’t come and the market won’t improve beyond the spate of April’s bargain shopping. Most call the situation worrisome. One tanner said that “the worst is yet to come with regard to damage to our industry”. Unfortunately, he’s probably right.

Instability is the new normal

“Flat at best for quite some time,” as one seller put it recently – we’re in for a protracted period of instability as economies everywhere try to return to a functioning production level.

Even if the economy starts humming, there will be a long lag time before demand perks up and an even longer one before it can be solidly felt throughout the leather supply chain. In addition, there are hides sitting around in warehouses across the globe: on the producer side due to lack of sales and on the customer side due to recent buying sprees. As we’ve written before, this can’t continue.

According to one source, even packers may be surprised to see prices fall even further before the situation truly stabilises. Regardless, no one can predict what things will look like as we move forward. As the industry finds its way, it’s important to keep in mind that things may never return to exactly the way they were. As historian James C Cobb wrote in Time magazine about life after this crisis recedes, “history just as surely cautions us against assuming we can anticipate what the world may look like when it does”.
Source: Hidenet.com 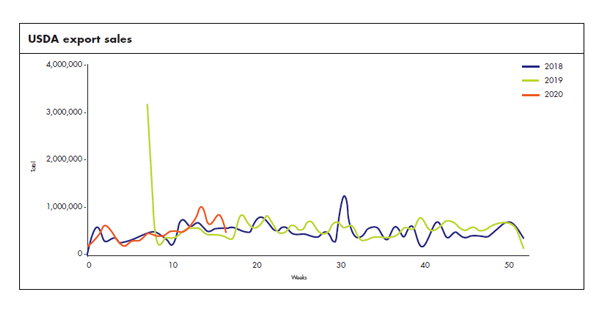 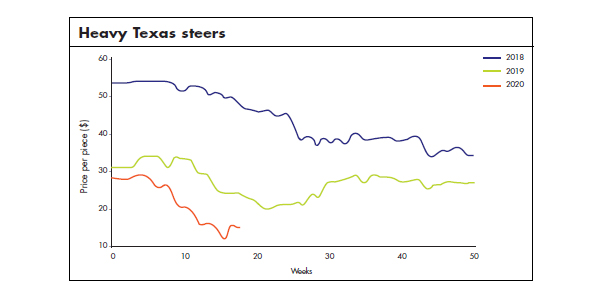 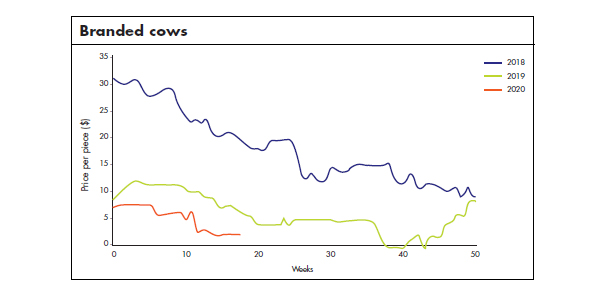 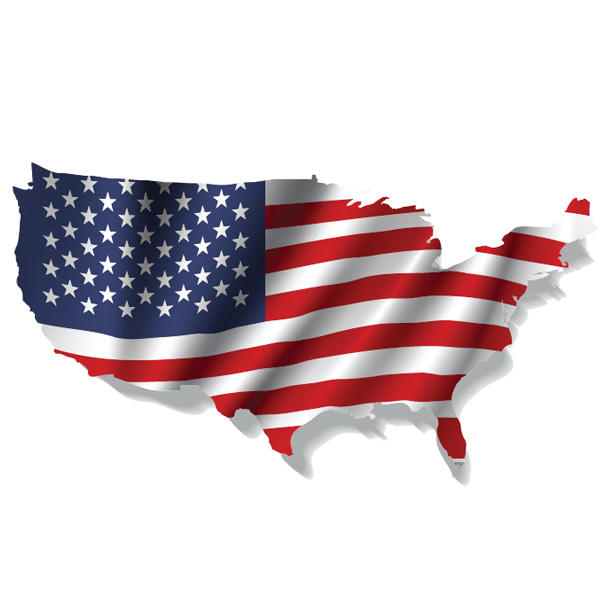 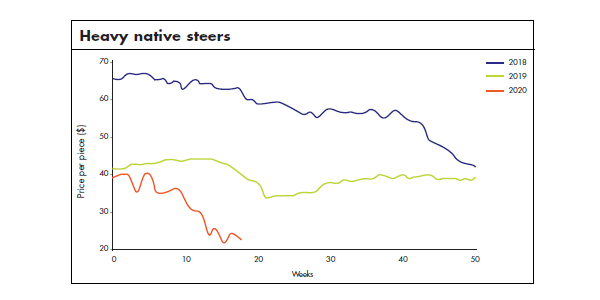 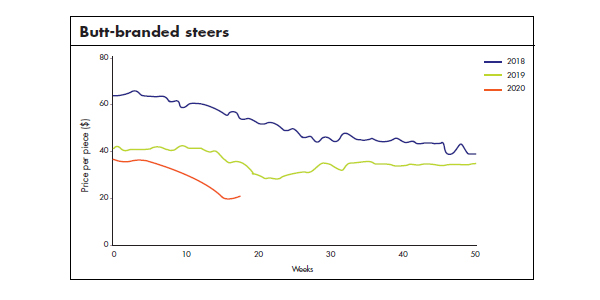 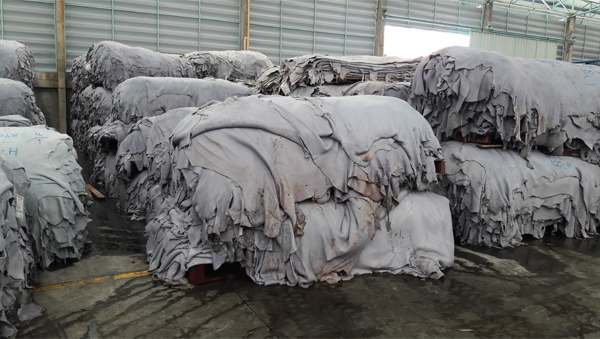