Wave of the future

Some studies have clarified that microwavestrengthened tanning resulted in leather having better thermal stability, but the influence of microwave on the tanning process and leather properties have not been elaborated in detail.

To illustrate the influence of microwaves on the chrome-tanning process, pickled skin was tanned for six hours during a penetration procedure and then basified for another four hours as a fixation process. The tanning under microwave irradiation (MW) was an experimental sample and the control was in a microwave-heated water bath (WB). UV-Vis, pH and ICP-OES were used to measure the changes of tanning effluent and leather chrome content during tanning. A shrinkage temperature meter, differential scanning calorimeter (DSC) and thermal gravimetric analyser (TG) were also used to determine the differences between MW and WB on aspects of thermal stability and resistance. A scanning electron microscope (SEM) was applied to character how microwaves affected the leather structure compared with conventional heating, and the results indicated that microwave accelerated chrome tanning agent penetration brought about higher chrome exhaustion.

The leather tanned with microwave assisting also had better hydrothermal and thermal stability, as well as thermal decomposition properties. However, the leather structure of MW, including hierarchical structure, was the same as with a WB.

In short, microwaves had a positive effect on accelerating the tanning rate, resulting in better leather properties without any negative effects on the leather structure. Therefore, microwaving can be a choice to achieve clean and sustainable chrome tanning by making tanning much faster and more efficient.

A microwave is the electromagnetic wave with a frequency between 300MHz and 300GHz; the civil frequency of microwaves in China is 2,450MHz. They can accelerate the chemical reaction rate, promote reaction yield, and make some reactions happen under milder conditions rather than high temperature and high pressure, and they are widely used to assist huge amounts of chemical reactions. The reason why microwaves have positive effects on chemical reactions could be attributed to thermal and non-thermal effects. However, the activation energy and preexponential factors of reactions under microwaves indicate a non-thermal effect, which doesn’t relate to temperature increase and is, therefore, a unique effect of microwaves to promote chemical reactions. In the leather industry, microwaving is used in procedures such as unhairing, dyeing, fatliquoring and drying, in which microwaves promote the chemicals to penetrate into the leather and result in more even distribution. The combination between collagen and chemicals is also strengthened by microwaves.

In tanning, microwaves have more sizeable influence on chrome tanning liquor hydrolysis and olation compared with heating by conventional methods. For vegetable-tanning liquor, microwaving has positive effects on colloid stability and dispersibility; moreover, microwaves can enhance the tanning effect. When microwaves were used to treat chromed leather, it had higher Ts and better tear strength. In vegetable tanning, microwaves made leather have higher Ts and also resulted in better polyphenol exhaustion.

Furthermore, microwaves made zirconium-tanned leather have better thermal stability. This evidence suggests microwaving has positive effects on tanning. Chrome tanning contains relatively independent procedures, penetration and fixation, as hides or skins have certain thicknesses. The previous study demonstrated microwaves could improve the chrome tanning process and tanning effect by using hide powder. However, the penetration and fixation procedures were not clear due to applied powdered tanning materials. As a result, the influence of microwaves on the chrome-tanning process – such as the tanning agent penetration rate and distribution during tanning, as well as how it affected leather properties – had not been illustrated in detail.

In this work, chrome tanning was undertaken with MW and WB respectively, and then the differences between the two samples on aspects of tanning liquor properties and chrome penetration were compared. Then the thermal stability of leathers tanned under different heating was measured by TG and DSC, and the leather structure was characterised by SEM. The research provided a reference to apply microwaves in the chrometanning process to achieve more effective tanning.

Pickled goat skins were prepared according to the conventional upper shoe leather process with thickness around 1mm. Sodium chloride and chromium sulphate hexahydrate were dissolved in 1,400ml of distilled water at first, then sodium bicarbonate was dissolved in 1,400ml of distilled water, and then the solution was put in chrome solution within 30 minutes under stirring. Finally, the mixture was stirred for another 30 minutes to obtain the chrome tanning liquor with 100g/L chromium sulphate and 33% basicity. The pickled goatskin was cut into 2×6cm pieces and 140g skin pieces were tanned in a 1,000ml beaker with 700ml chrome tanning liquor prepared above. The MW sample was heated by microwave at 40°C with stirring and the WB sample was warmed by water bath heater under the same conditions. After five hours of tanning, 1g sodium bicarbonate was added into the tanning system every hour and repeated five times; the total tanning time was 10 hours. The first five hours were regarded as penetration procedure and the last was fixation procedure. The pH of both tanning liquors were measured every hour by pH-3C pH meter, and at the same time, 2ml of tanning liquor was sampled for UV-Vis determination. Moreover, skins were taken out every hour for chrome content testing, and the shrinkage temperature measurements were carried out after four hours of tanning and then after 10 hours of tanning. The leathers were then lyophilised when tanning was finished for other tests.

60%
Maximum bio-based content of the solids of a polyurethane dispersion, while still maintaining the desired performance in the final coating.
Stahl

The shrinkage temperature was tested in a bath of 75% glycerine solution, and each value was an average of two tests. Lyophilised leather was digested in a 100ml flask with 10ml nitric acid and 5ml hydrogen peroxide under boiling for 30 minutes. After cooling down, the digested solution was dissolved in a 100ml volumetric flask. The total chromium content in the digestion solution was determined and then the content of Cr2O3 in hide powder was calculated.

It was found that the pH, R value of WB tanning liquors were always higher than MW under the corresponding time in the whole chrome process. However, the leather Cr2O3 content of MW was larger than WB under the same conditions. Because microwaves had a more powerful effect on chrome complex hydrolysis and olation, and resulted in lower pH, the lower pH of MW samples compared with WB indicated microwaves also promoted chrome complex hydrolysis and olation. In general, if there is a bridge formed between chromium and ligands, the R value is larger than 1.19, and the more bridge, the higher the R value. The results of the R value observed suggested that microwaves might improve the combination between large-size chrome complexes for causing lower R value, and the Cr2O3 content results also indicated the same situation.

Furthermore, the Cr2O3 content of MW was always larger than WB, indicating that microwaves promoted chrome penetration and combination during tanning. On the other hand, microwave-assisting could reduce tanning time but increase efficiency as less time was needed to achieve the same chrome.

In summary, microwaves had positive effects on chrome penetration and combination during tanning. As chrome complexes and collagen were polar molecules, they were affected by microwaves and generated additional movement style, which oscillated under the influence of microwave on leather thermal stability electromagnetic fields, while the system under conventional heating only contained the movement caused by temperature. Therefore, molecule movement under microwaves was more turbulent to benefit for chrome penetration, and a higher possibility for the collision between collagen residue and chromium complex to produce better chrome exhaustion.

One of the most important tanning effects is strengthening the thermal stability of leather. In this part, the leather tanned under different heating methods was subjected to DSC, TG and shrinkage temperature tests to clarify the influence of microwaves on the chrome tanning effect. In DSC results, higher denaturation temperature (Td) and greater energy-consuming during denaturation (ΔH) of MW sample were obtained. They indicated the collagen conformation of leather tanned under microwaves was much more stable. In TG results at the maximum decomposition temperature (Tmax), there was less weightlessness between 200°C and 600°C, which attributed to peptide decomposition during heating, and collagen structure stability of MW were observed.

In addition, more carbon residue of MW indicated that there were more non-violated substances, such as chrome, in leather and much less collagen decomposed during tanning. They illustrated that microwave-assisting during tanning improved leather thermal resistance. In Ts results, the terminal Ts of MW was 6.3°C higher than WB. Moreover, the Ts of MW after penetration was 85.6°C, while the WB at same condition was only 73.5°C. They showed microwaves not only improved cross-linking effects but also made the effect work under lower pH.

Since in tanning liquor under microwave irradiation there were more high-positive charge and molecularsize chromium complexes – which have better affinity to collagen and mainly contribute to cross-link – the combination between collagen and chromium complexes was strengthened; in other words, the tanning effect was stronger. On the other hand, just as microwaves obviously promoted other chemical reactions, the cross-linking reaction between collagen and chromium emerged more easily and the efficiency might be higher under microwaves compared with water bath heating. No matter if it was higher chrome exhaustion or a better cross-link, microwave-promoted chrome tanning effects resulted in better thermal stability of leather.

SEM was used to observe the morphologies of leather tanned under different heating methods. When the magnification was 35, the cross section of two samples had a clear interwoven flexuous fibre bundle network. With the increasing of magnification to 2,000, the leather consisted of thin, uniform fibres that packed together in an orderly fashion and there was no significant difference between the two samples. Under higher magnification (20,000) collagen fibrils exhibited the alternative brightness and darkness, and attributed to the unique staggered by a quarter of collagen. Although microwaves promoted chrome-tanning process and effect, the hierarchical structure of leather remained as normal. 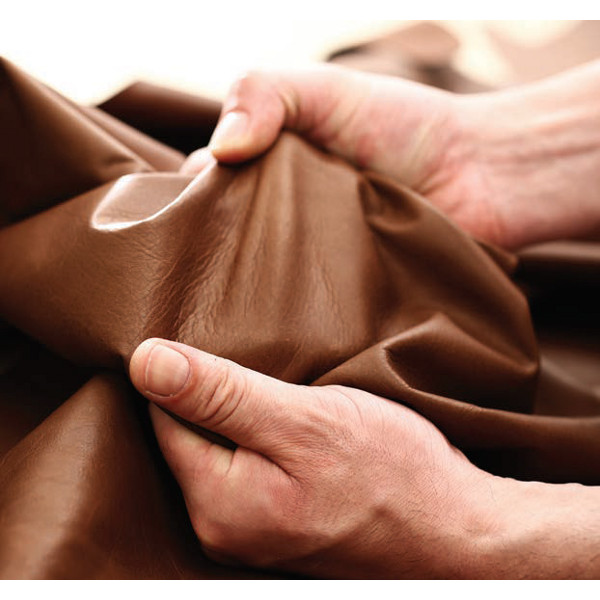 Microwaves can be an effective routine for accelerating the chrome-tanning process. 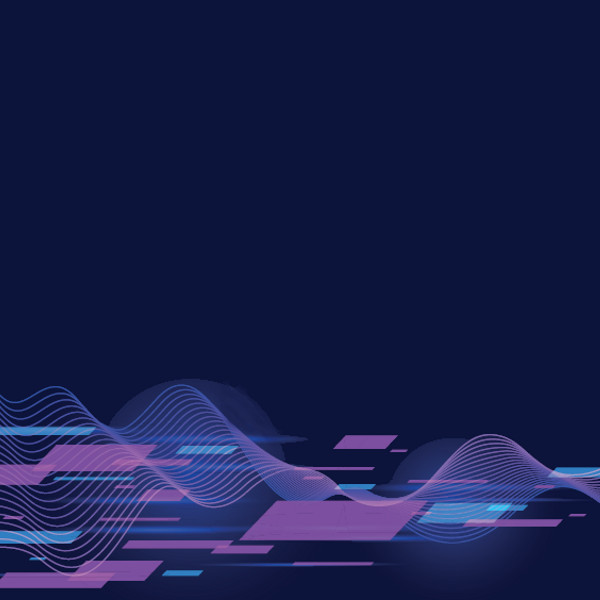