When will it end? Reviewing the Dhaka tannery impasse

On August 13 a revised proposal for the relocation of Dhaka’s tanneries – responsible for mass pollution and severe health problems amongst workers and the local populace – was placed before the Executive Committee of the National Economic Council. It is the latest development in a ten-year standoff between tanneries and Bangladeshi authorities. Jack Wittels traces the history of the conflict and reviews the government’s new policy proposal

This time last year former LEATHER International editor, Martin Ricker, called for the Bangladeshi government to take action over the appalling pollution caused by tanneries in the Hazaribagh district of Dhaka, the nation's capital.

"What is going on in the Hazaribagh district of Bangladesh is shameful," he said. "It is time that the authorities in Dhaka stood up to the tanners and told them to move or close."

Ricker was rightly outraged at the scale of pollution produced by the 150+ tanneries operating in the district at that time. The following month, a report was published by Human Rights Watch describing how effluent containing a number of harmful chemicals ran directly from the tannery floors into open gutters, where it flowed through some of the district's slums before emptying into the city's main river, the Buriganga. Air pollution and solid wastes were also being produced en masse.

The ongoing failure of government officials and tanning industry representatives to reach an agreement on how much the industry would be compensated for relocation was another source of great frustration. The planned move to a site in Savar, some 20km west of Hazaribagh and safely outside the capital, had been announced by then Prime Minister Khaleda Zia as far back as July 2002. A memorandum of understanding (MoU) agreeing to the move had also been signed in 2003 by both the government and tanning associations, yet no progress had been made.

Twelve months on and Hazaribagh's tanneries are still as bad as ever, operating with the same flagrant disregard for human health, safety and environmental responsibility. Human Rights Watch estimates that 75 metric tonnes of solid waste, primarily consisting of salts and bones along with leather shavings and trimmings, are daily produced by the tanneries. This is in addition to 21,600 cubic metres of "environmentally hazardous" liquid waste containing harmful chemicals including ammonium, sulphur and chromium. A 2007 study by the Blacksmith Institute also included the district in a list of 30 of the world's most polluted places.

The impact of these inexcusable conditions stretches far beyond the tanneries' immediate workforce. Studies from as far back as 1997 indicate that skin and kidney diseases, as well as jaundice, diarrhoea and fever, are more common amongst Hazaribagh inhabitants than other areas of Dhaka with similar socioeconomic characteristics. Children as young as eleven have become ill through exposure to hazardous chemicals. Minors have also been injured whilst working in the tanneries, performing hazardous tasks such as cutting tanned hides with razorblades, soaking hides in chemicals and operating dangerous machinery.

On August 13 of this year, a second revised proposal for the tanneries relocation was placed before the Executive Committee of the National Economic Council (Ecnec) - the same body that endorsed the original proposal in 2003, and the first 2007 revision. The latest document offers a new relocation deadline of June 2016 at a total cost of TK1078.71 crore (approx £89 million). The government has agreed to pay 80%, with the factory owners paying the remaining 20% in instalments over 15 years.

This figure is more than six times the original total cost of TK175.75 crore that was estimated for the move back in 2003. The price hike is largely due to the Bangladeshi government agreeing to compensate tanners TK250 crore for the relocation process, as well as paying a further TK477.46 crore for Chinese joint venture JLEPCL-DCL to provide a Central Effluent Treatment Plant (CETP) in Savar.

Yet even with such generous state funding, there is still a strong possibility the relocation will suffer further delays. The tanners are refusing to make the move until the ECNEC adjust certain conditions of the MoU, which the tanners have yet to sign. The tanners' chief points of concern are an increase in relocation fees for factory owners, and a government failure to demarcate land for workers' dormitories in Savar.

"As per the proposal, we [the owners] have to pay Tk376.15 per square feet now for the allotted plots ranging from 10,000 to 32,0000 sq ft in Savar. Earlier, the fee was fixed at Tk197 per sq ft", said Belal Hossain, chairman of Bangladesh Finished Leather, Leather Goods and Footwear Exporters' Association has observed.

"This is not acceptable as the higher charges will increase our relocation costs significantly", he added.

While the tanners' objections may sound pedantic in the context of widespread human suffering perpetrated by their factories, national authorities are seemingly powerless to force compliance. Ten years of negotiations have resulted in little more than missed deadlines and spiralling costs. More worrying still, there is a suggestion that such inefficiency is not entirely the result of merely incompetent politicians. In 2012, a senior member of Dhaka's Department of Environment admitted that: "We are not doing anything for Hazaribagh. The tannery owners are very rich and politically powerful."

These words perhaps hint at the real reason behind the government's failure to relocate the tanning industry.

Despite these grim sentiments, however, there is still hope for the residents of Hazaribagh. The European Union, the leading purchaser of Bangladeshi leather exports, has threatened to boycott the country's products as of 2014 if the CETP is not completed - a strong incentive for a nation so dependent on the industry. Other optimists have pointed to China; its tanning sector was once known for its lack of environmental controls, but the country is cleaning up its act and many of its factories are now world leaders in worker safety and environmental control.

The Bangladeshi planning ministry's latest proposal was reportedly inspired by Prime Minister Sheikh Hasina's heavy criticism of the long delays in implementing the scheme. Let us hope that this PM and her government has the tenacity and ability to succeed where previous politicians have failed the people of Hazaribagh.

Untreated tannery effluent in a pond near the Hazaribagh. 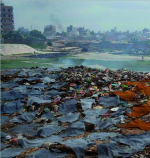 Leather scraps laid out to dry near a landfill in Hazaribagh.