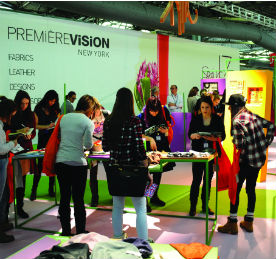 Organisers said that attendance reached an all time high with 4,143 visits in two days, which was up 4% from the January edition last year. As a result of its growth and additional offerings, PVNY moved from Pier 92 next door to Pier 94 to accommodate 30 leather suppliers and 26 apparel manufacturers from Europe, Asia and South America.

The expansion marks a new stage in PVNY's evolution. Already renowned for its premium offer of fabrics, accessories and textile designs, the show now includes leather and manufacturing after high demand from tanners associated with Cuir a Paris before the Première Vision acquisition in 2014. The event, already a North American market leader, becomes a more dynamic destination for buyers to develop collections. Each company, whether returning or new to the show, was selected according to strict Première Vision criteria and specifically the companies premiering in the leather pavilion were distinguished by exceptional quality of products for clothing and high-end leather goods.

Among them were Samanta and its fantasy skins; Tanneries Haas, offering an extraordinary palette of calf skins for leather goods; Nova Kaeru and its exotic skins; lambskin specialists Mégisserie Lauret; RG Deri; CKD Cetinkaya; and Cuirs du Futur. The show also offered a chance to meet Megisserie Alric, winner of the 2015 PV Awards Grand Jury Prize for the most outstanding and pertinent development in the season's leathers.

The aggressive inverse proportion of planning for a two-day show and the two-day show itself were starkly apparent towards the end of the first day when Marc Brunel managed to stop "running around like crazy" for a few minutes to speak with Leather International about how the show was going, the long road to get to this point and what lies ahead. Getting traction can be tricky with any development to a show, but he appeared buoyant, which was reflected in the exhibitors as well.

Leather International: What has the feedback from exhibitors been like?

Marc Brunel: They are pleased to be here among the textiles, fabrics and other concepts, and that they are part of the exported show from Paris [to] New York.

Was it only natural that leather was going to be integrated?

Yes. In fact, in the past when we were bought by Première Vision in 2014, the strategy was to offer something in New York - having spoken with tanners that are part of the established show in Paris going back to Cuir a Paris before the acquisition. But then, the show was in Pier 92 [next to Pier 94, where the show is now] and it's too small. So when we had the opportunity to get this area, a few weeks before the last September edition, we immediately decided to propose to the tanneries the concept. But it took some time to launch the idea and look at how to place leather within the fabrics area - the first time that something like this has been done in the fashion industry.

It took some time to launch the idea and look at how to place leather within the fabrics area – the first time that something like this has been done in the fashion industry.

We put it at the entrance of the show near manufacturing. So they are pleased to have an alternative in New York - a new concept - because the market is very slow in Europe, Russia and Asia, and everyone thought that the US is a stable place to exhibit and to find new clients. They need the US, they need New York and they're happy that we offer something different here, but now we have to wait to learn how to grow.

So when Première Vision took over from Cuir a Paris, was there an immediate plan to have leather in the New York show?

Not exactly. There was a request from the leather industry and we also assessed the opportunities to develop services here, so we approached big brands like Coach once we had the area at Pier 94. But before that, we proposed it in Paris, which is the flagship show - a total offering for the fashion industry.

This was the starting point; then if we can develop the leather manufacturing in some area, we will do it. Right now it's New York but in the future it might be Turkey. But Turkey is complicated, so [we are taking it] step by step. Now, in New York, we will implement the July edition, and some companies have already requested to be involved.

As the leather offer here grows, is there room at Pier 94 to accommodate it?

Yes, we have enough space to develop leather. But we have a committee selection that has to approve the shows, and it is hard work to make the right proposal [in order] to get things approved.

Considering this is the first time leather has been at Première Vision in New York, what kind of marketing and promotion have you done to give it as high a profile as possible?

We promoted the leather sector to all the visitors already there. There are about 4,000 people at each edition, so we heavily promoted to this target audience. We have a lot of contacts from the show in Paris and a lot of US brands coming to Paris, so we work very closely with these brands to promote the show. We've also developed new databases on small designer shoe companies because, in New York, we have to target the designers.

Were you at all worried that leather would be overshadowed by the other offers like textiles and fabrics?

No I don't think so. I'm quite confident of the energy. All the people in the fashion industry need to have everything in one venue rather than going to many different fairs. I don't know the habits of the US buyers. I don't know if they can spend two days, or just come for a few hours, but I think that with this kind of fair, people will spend two days here.

So there is a strong enough market here to sustain a leather component with each edition moving forward?

Yes, absolutely. The show has attracted people from Canada as well, but New York mainly.

And with Lineapelle already here, what makes PVNY unique?

We don't have the same concept. Lineapelle is a specific player in the leather industry for prêt and we propose a concept with offerings for the whole fashion industry. So we work with a different approach to the exhibitors, and attract clients new and old. The market is very concentrated and they used to work with the same clients; the big brands help a few companies to be healthy and they need to find new customers. The way to work with fabrics and leather helps us to attract new buyers.

So was the journey from the Cuir a Paris acquisition to now in terms of including leather here particularly arduous?

As an organiser, we have been close to the exhibitors for a very long time. For 15 years, we've worked with Cuir a Paris and then with Première Vision as an organiser, and the relationships are there; we visit the tanneries all the time, so the partnerships are there also.

To bring them here is great, but they are not expecting anything impossible for the show; they are confident that Première Vision can bring something new for them, so we work with them and we'll see if it works. Paris is quite efficient, and we want to propose something new to the tanneries and to the industry; we don't want to fight with anybody.

The French Tanners Association, which has a stand here, understands our purpose; we have ten companies from France here for the first time and we are expecting more for the next edition. With Italy, we start with sales and I have some visits in Santa Croce arranged; there's a good response and we're waiting on more.

The idea is not to get 100 people here. My way of working with the exhibitors is to first work with people already aware of the US market. Then, after that, we'll bring in others. I think to start a show like that, we have to get some exhibitors aware of the market because this is a hard area. We have to keep calm and take it slowly. If they're looking for something like a finished product for the first edition, it's impossible. For the next edition, we will see how many people follow us.

How much more room do you have to grow here?

We have the committee selection and we want the right people here - not just a lot of people. We want the right people to work with us and target the market because the market in the US is mid-range; even if you're targeting luxury, there are some capsule collections within big brands that can be targeted. You also need price and volume for the US; if not, it's not suitable and not targeting the right buyers, so we're working that way.

I think the people we brought for this first edition were the right ones - very creative, very fun; mainly those who manufacture leather for garments. The prices are very interesting, so we will slowly and carefully build off that. It started in Paris like that - as a prêt collection, very early in the season, very high-level in the Italian and French markets, and it grew from there.

Is that's what people come to expect with Première Vision?

Yes, and in the right market. We have the right product for this market now, so we will be successful in New York, and in the US in general. We need to keep our clients healthy. It looks simple from the outside, but when we make a transition, mixing leather with textiles, it's difficult because you have to follow trends, which aren't the same for each offering. It takes time. This is the first time we're able to mix together trends for leather and textiles, and it's very interesting for buyers to see that they are complementary.

So is there is a synergy between industries?

Completely. The people are the same, working in a way to propose trends for leather and textiles even though the printing and approach is different. We clearly thought about present trends and how they can work together to give each other inspiration. We want to help create a bridge between textiles and leather.